Small trade tokens, made in imitation of the guineas of George III, issued between 1787-1800, and nicknamed 'spade guineas' from the shape of the shield on the reverse. These tokens are made of brass, sometimes so highly burnished that they are taken for gold.

The tokens were made by manufacturers...
Read all
8 results
Grid list 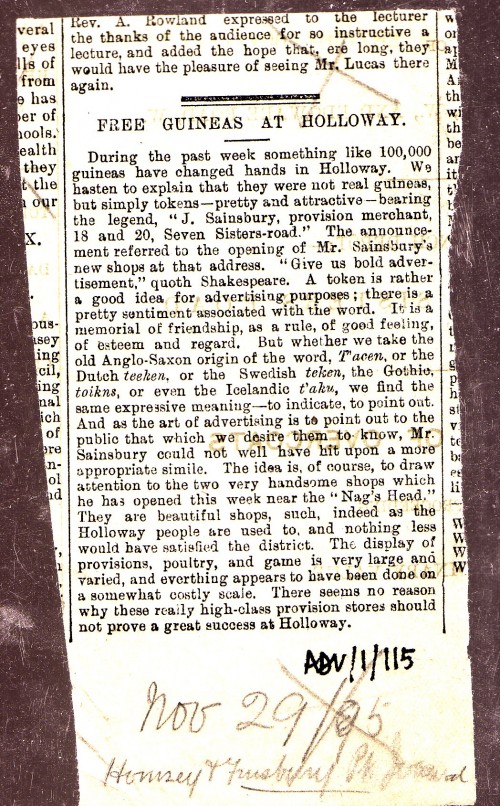 Newspaper cutting from the Hornsey and Finsbury Park Journal referring to the 100,000 guinea trade tokens that changed hands in one week after the...

Copper alloy tokens with gold coating. 20 tokens have head profile and inscription ' J. SAINSBURY FOR BEST PROVISIONS' on one side and heraldic...

Copper alloy tokens. All feature heraldic shield and inscription 'M.B.F.ET.H.REX.F.D.D.ET.L.D.S.R.I.A.T.ET.E.1798' on one side and profile head and...

Letter from Mr R.N.P. Hawkins to The Company Secretary dated 6 Mar 1985 enclosing a complimentary offprint of Supplement III to his "Catalogue of the...

Copper alloy tokens with a gold-coloured surface and a variety of head profiles and inscriptions. For example, some tokens have the inscription...

Newspaper cutting describing the confusion experienced by a member of the public when he found a brass replica of a George III coin dated 1798 bearing...

Small trade tokens, made in imitation of the guineas of George III, issued between 1787-1800, and nicknamed 'spade guineas' from the shape of the shield on the reverse. These tokens are made of brass, sometimes so highly burnished that they are taken for gold.

The tokens were made by manufacturers in Birmingham, and were bought in vast quantities by many retailers to be stamped with their own devices, and to be given away to customers. Although these tokens had no monetary value and could not be exchanged for goods, customers collected them in large numbers for use as toy money or gaming tokens, and they proved to be a highly successful advertising gimmick.

The Sainsbury tokens vary considerably in design. The earliest known was issued in 1882, and bore the head of George III on one side with the legend "Wholesale Depot - London NW" and "J. Sainsbury, Provision Merchant opposite West Croydon Station" on the other. Several varieties of tokens were issued with the opening of the Seven Sisters Road North branch of Sainsbury's in 1889 - examples include "special table delicacies", "dealer of poultry and game", "arrivals of pure butter daily", and "high class provision merchant".

The Company's last purchase of "guineas" occurred in 1913 to celebrate the opening of a branch in Norwich. A very popular design of token much used at the beginning of this century just bore a rather double chinned profile of George III and the legend "J. Sainsbury for best provisions". Apparently the Company disposed of a large number of its tokens in c.1915 to a travelling theatre group to use as stage props.