report on deliveries by rail and road including examples of short deliveries and minor damage occurring by rail, 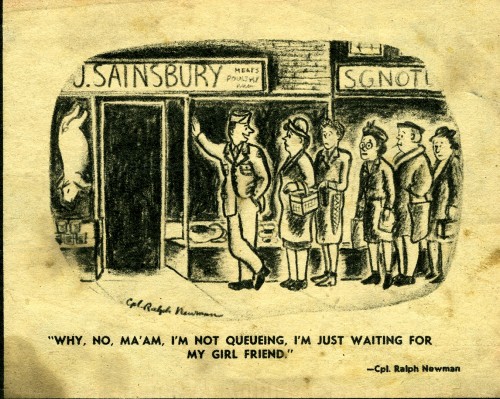 "Why, no, ma'am, I'm not queueing…" cartoon by Ralph Newman

Cartoon by Corporal Ralph Newman featuring man at entrance to Sainsbury's store with caption "Why, no, Ma'am, I'm not queueing, I'm just waiting for... 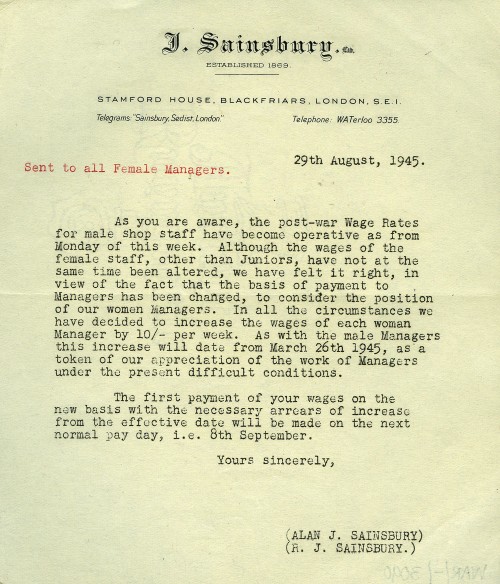 report on deliveries by rail and road including examples of short deliveries and minor damage occurring by rail,

self-addressed postcard sent to all staff on National Service for them to fill in their present details,

letter to female customer from headquarters asking if she could arrange for some of the lighter goods she buys to be carried home due to the rationing of petrol supplies (1939),

letter to wife of a member of staff who had been called up for full-time National Service asking her to write to the Directors if her family were in financial difficulty (with copy of notice sent to staff leaving to join H.M. Forces),

letter informing all female Managers of an increase in wages,

wartime cartoon by Cpt. Ralph Newman with caption: "Why, no, Ma'am, I'm not queueing, I'm just waiting for my girl friend",

letter to Branch Manager from headquarters asking to be advised of the branches at which he requires help most and what assistance he requires,

letter from headquarters to female employee informing her that her progress had not gone unnoticed and that it was hoped she could come for interview,

receipt from headquarters acknowledging a cheque for rent from the Guildford branch,