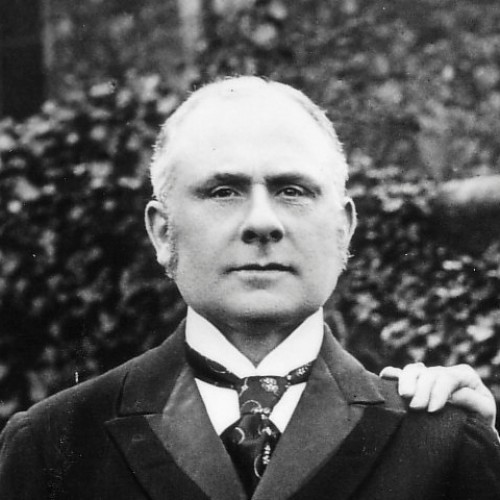 Born at 5 Oakley Street, Lambeth, London, in 1844, the youngest child and only son of John Sainsbury, an ornament and picture-frame maker and his wife Elizabeth. His first job was with a grocer in New Cut at the age of 14, followed by working for Henry Jeans an oil and colour merchant based in Woolwich, Finally he worked for George Gillet, another oil and colour merchant, based at 57 Strutton Ground, Victoria. He was co-founder of the Sainsbury's firm with his wife Mary Ann Staples. The date of the firm's foundation is traditionally ascribed to the date of their wedding (20 April 1869). The first store was at 173 Drury Lane, and initially the family lived above the shop premises, moving to live above their second shop at Queen's Crescent, Kentish Town following its opening in 1876. In 1882 he established a completely new style of 'high class provisions' shop in Croydon. He was criticised for his expensive choice of shop fittings, but the tiles kept the shop cool and were easy to clean. His emphasis lay on combining low prices with high quality products.

Under his guidance the number of stores proliferated, both through buying new sites and taking over existing stores such as those run by this father-in-law Benjamin Staples. Sainsbury went on to expand his network of shops through his participation in a 'pact' between members of his extended family and friends. This pact involved several food retailers in London, including David Grieg, Tom Haile and the Staples family. Pact members undertook not to open shops in direct competition with each other, and to help each other to gain footholds in new areas by offering first refusal of premises to other members of the group. John James' innovative approach to retailing extended to supply too; to understand production processes and improve product quality, he built up close relationships with his suppliers. Some, such as the Devon farm Lloyd Maunder, continue to supply Sainsbury's today.

In 1882, John James Sainsbury made two major developments to his modus operandi. The first of these was the foundation of his first depot at Allcroft Road, Kentish Town, with the facility for buying products in bulk. At the same time, he began producing his own bacon, a new venture in both production and product range. The second development was the purchase and outfitting of his first shop outside London, at London Road Croydon, which John James Sainsbury micro-managed. This branch created the pattern book for all future branches, with tiled walls and counters, a mahogany screen partitioning the shop floor from the offices and stained glass spandrels in the windows. Not only did this create a distinctive 'look', it was also supremely easy to keep clean. The move to Croydon also saw a broadened product-base, particularly of cheeses and poultry. In 1890 John James Sainsbury took a lease on premises in Stamford Street, Blackfriars which would become the firm's centre of operations for the next century. This location was important for the Thames wharves and the area known as 'London's Larder'. From 1903 the firm expanded into the grocery trade, in particular developing their own range of teas. In the same period, starting in 1899, Sainsbury's also began to develop "country" branches in provincial towns. From 1915 he ran the business in partnership with his eldest son, John Benjamin. By tradition John James Sainsbury's last day "in the office" was 27 November 1927, barely more than a month before his death.