Although it may not be one of its most obvious uses, the Sainsbury Archive contains a surprisingly large amount of information about post-war public art. On this website there are numerous photographs of the murals, reliefs and sculptures which have adorned the company’s branches and car parks over the years. Sainsbury’s staff magazine ‘JS Journal’, likewise available here digitally, often provides details about pieces and their creators. The Archive may also contain other uncatalogued and undigitised records of certain artworks, such as design material.

The earliest Sainsbury’s branches were decorated using tiles and mosaics with both artistic and hygienic merit. But this Story focuses on works less integral to the functioning of a shop, which only became prevalent in the second half of the 20th century. It is not an exhaustive survey, but gives an overview of the different types of public art Sainsbury’s has commissioned and the range of artists who have executed it.

It is unclear exactly when public art was first considered in the planning of Sainsbury’s branches. A report on European food retailers in the December 1957 issue of ‘JS Journal’ may have provided some inspiration, highlighting a Rotterdam supermarket rebuilt after the Second World War with a ‘remarkable piece of modern sculpture’ by Naum Gabo outside it. The work was said to express ‘Hope’. By 1966 sculpture was deemed front page news, as the ‘Journal’ covered in detail the result of a competition for a piece to stand outside the new Chelsea branch. Director Robert James Sainsbury, like other members of his family a keen patron of the arts, was joined on the judging panel by such luminaries as Sir Roland Penrose and Henry Moore. 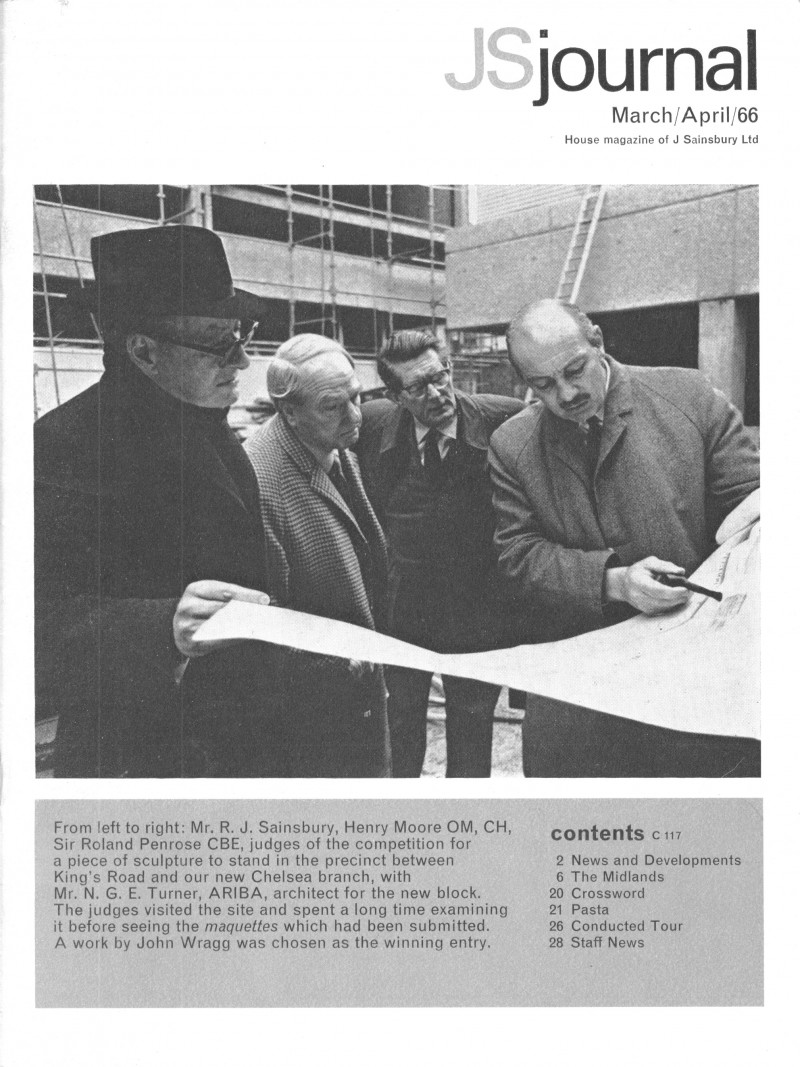 The winning work, by John Wragg, was cast in aluminium. Though ‘suggesting a living form’, its irregular shapes are highly abstract, like many other public sculptures of the time. 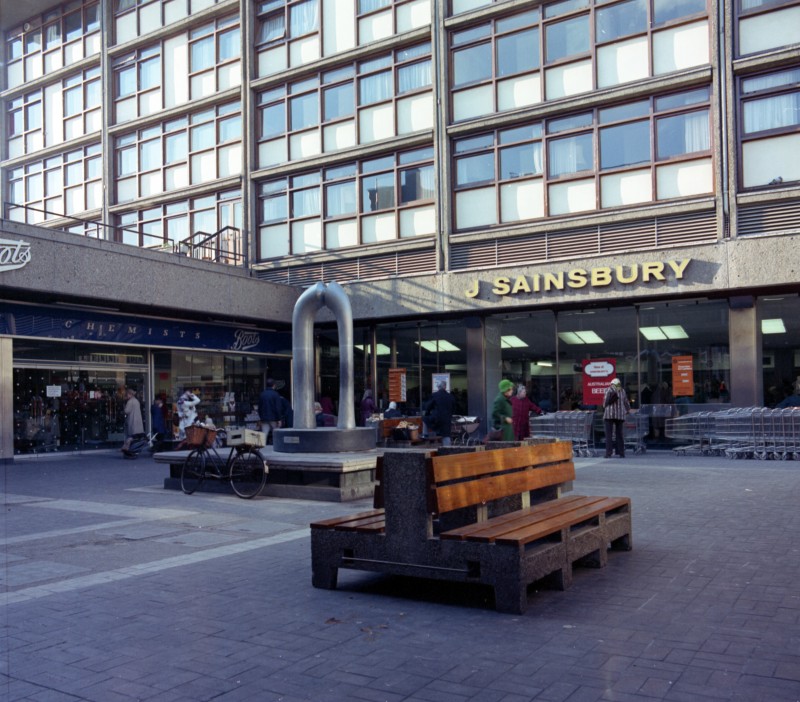 Other branches opened in the 1960s featured works quite different in style. Shoppers in Chichester and Coventry, for example, could enjoy detailed maps of their local areas carved in polished granite by John Skelton, a nephew and apprentice of Eric Gill. During the next couple of decades Sainsbury’s would commission murals depicting a town’s history and industries more regularly than any other type of public art. Several were by husband and wife team Henry Collins and Joyce Pallot. Sainsbury’s first commissioned these artists’ work for a branch in their native Colchester, following their chance meeting with the architect on a train. 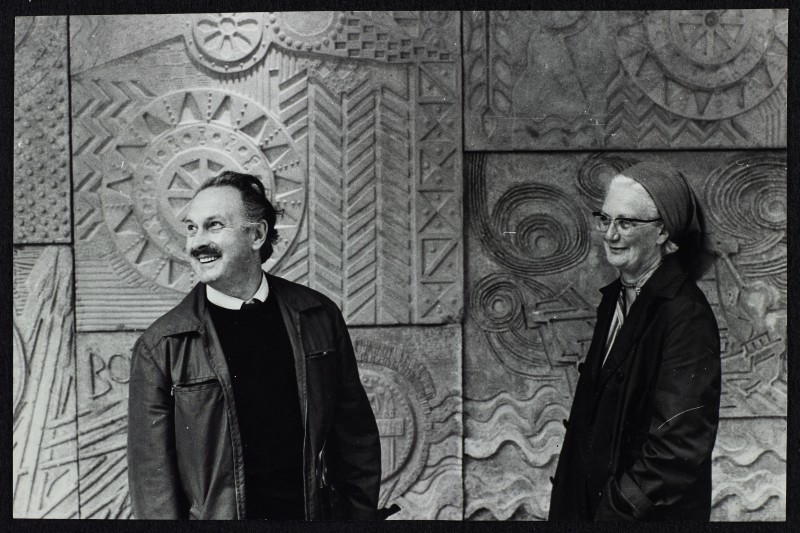 The pair’s method began with producing polystyrene moulds and pouring in concrete. They then painted and gilded the resulting panels. Following the successful reception of their work in Colchester, Sainsbury’s commissioned similar murals for branches around the country, including Gloucester, Hitchin, Worcester and Cowley. Over time these murals have gained recognition as heritage assets, with some being relocated for preservation when their original supermarket sites have been redeveloped. 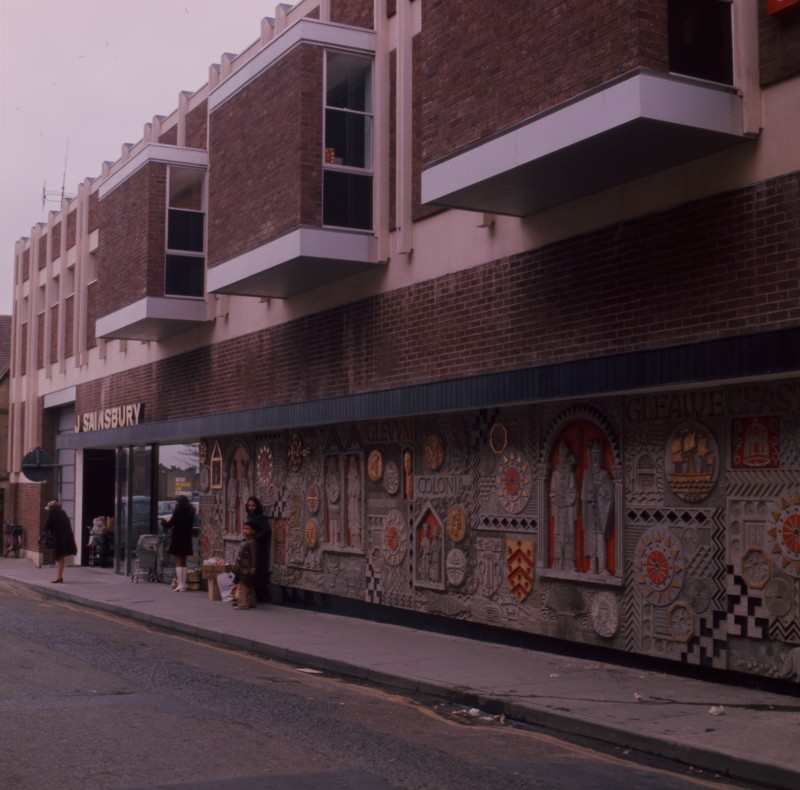 Favourite Comments
SA/BRA/7/G/2/1/99 Image of the mural on Hare Lane at the entrance to 63/69 Northgate Street, Gloucester branch

A sizeable work added interest to The Sainsbury Centre in Sutton Coldfield, another example of the large, pedestrian-friendly shopping precincts which were becoming increasingly common by the 1970s and offered significant scope for public art. So far the Archive has yielded little information about this piece compared to other murals, including who the artist was. 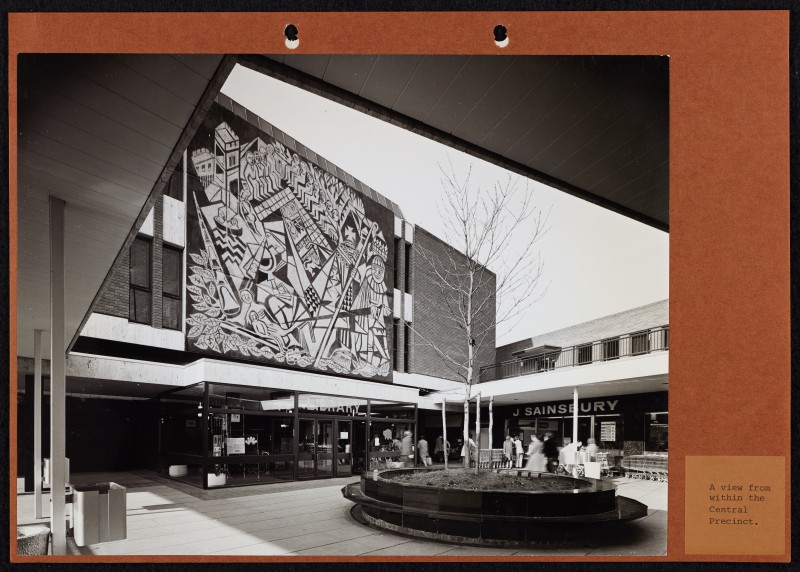 The concrete murals could also be described as reliefs, and other examples of this art form appear at some branches. Eight panels by Steven Sykes – whose previous work ranged from D-Day camouflage to a chapel at Coventry Cathedral – adorn Braintree branch, opened in 1982. Once again, they depict historic trades and crafts of the area, with one ‘representing a mediaeval market to acknowledge the previous presence of a market on the site’. 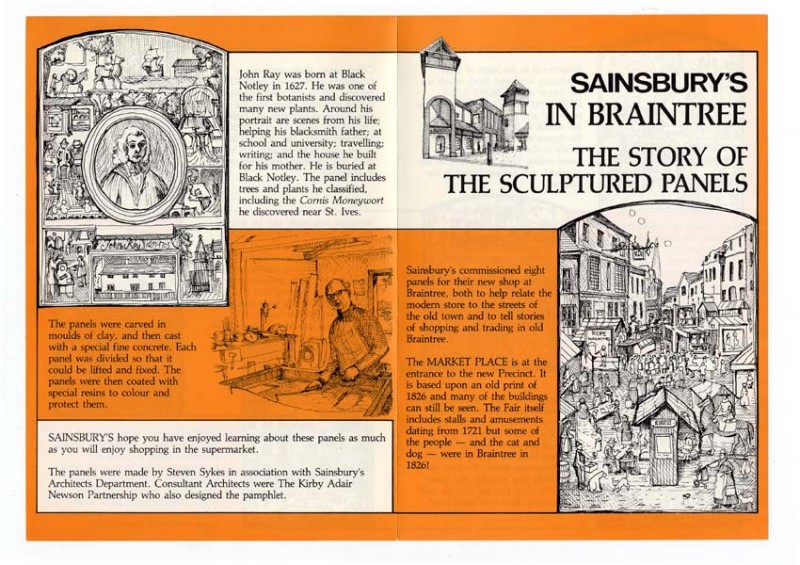 Favourite Comments
SA/BR/22/B/42/2/2 "Sainsbury's in Braintree: The story of the sculptured panels" leaflet

Another early 1980s Essex branch included reliefs with a less common historical theme: Sainsbury’s own heritage. Shoppers who glanced above the ‘J SAINSBURY’ sign at Rayleigh Weir saw one of two concrete depictions of John James and Mary Ann Sainsbury, the founders of the company. These were also the work of Essex-based Henry Collins and Joyce Pallot. When the branch was redeveloped, one of these reliefs was moved to a more prominent position next to the entrance. 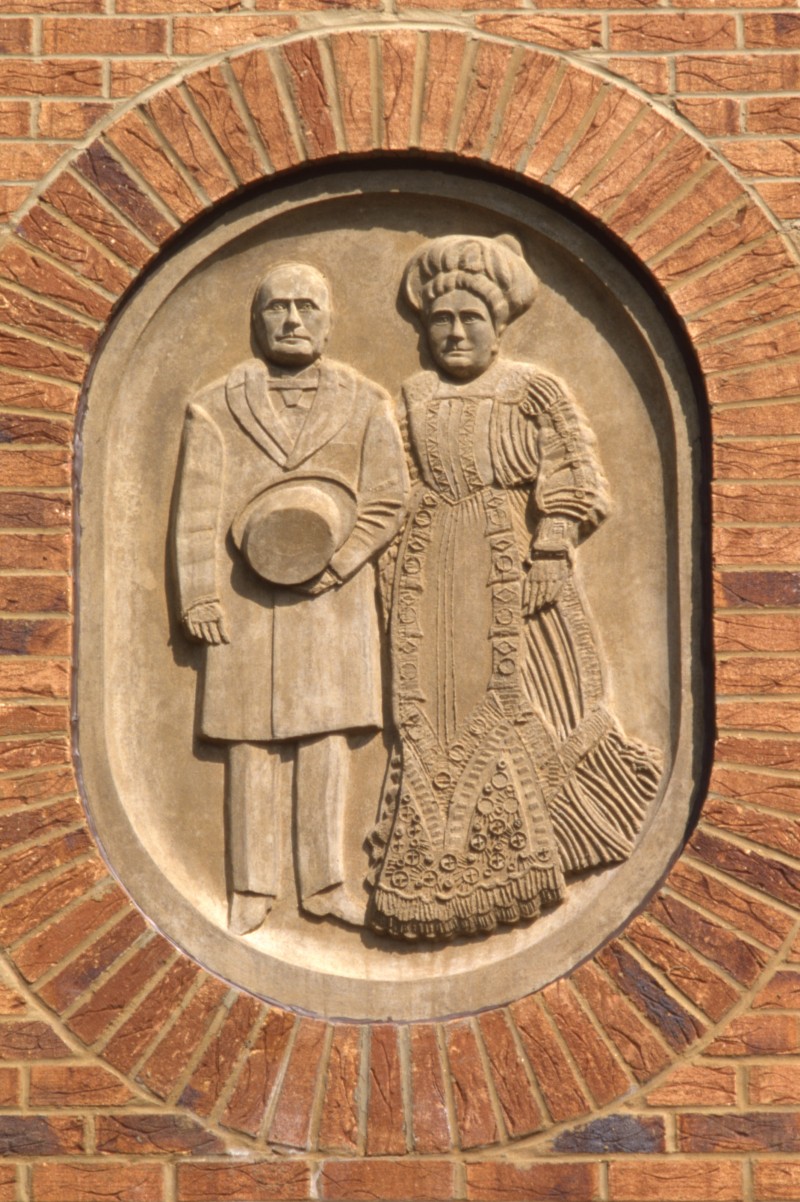 The relief panels installed at West Ealing branch looked to the future in their subject matter rather than the past. Sculptor Liz Mulchinock used colour resin reinforced with fibreglass to create a hopeful scene of children playing among trees. 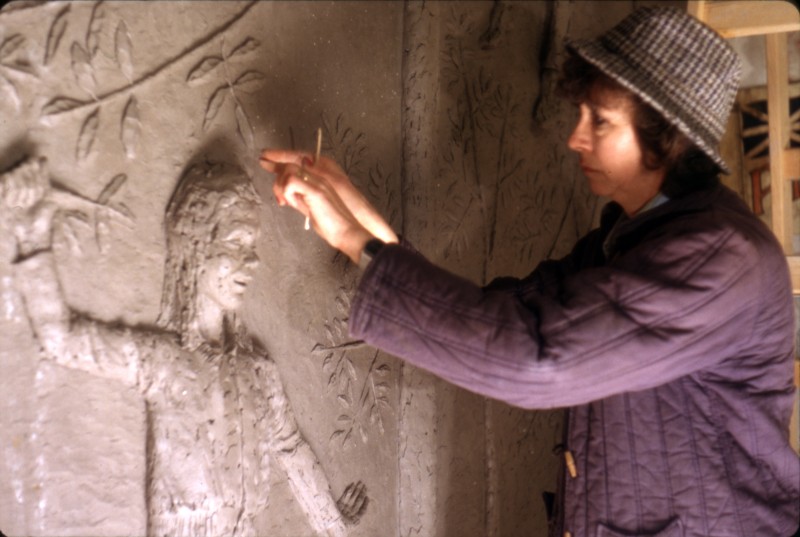 A similar theme of ‘children throughout the ages’ was chosen for Fareham a decade later. But this relief, cast in bronze by David Backhouse, was unusual in that it was originally sited inside the branch’s main entrance rather than on an exterior wall. 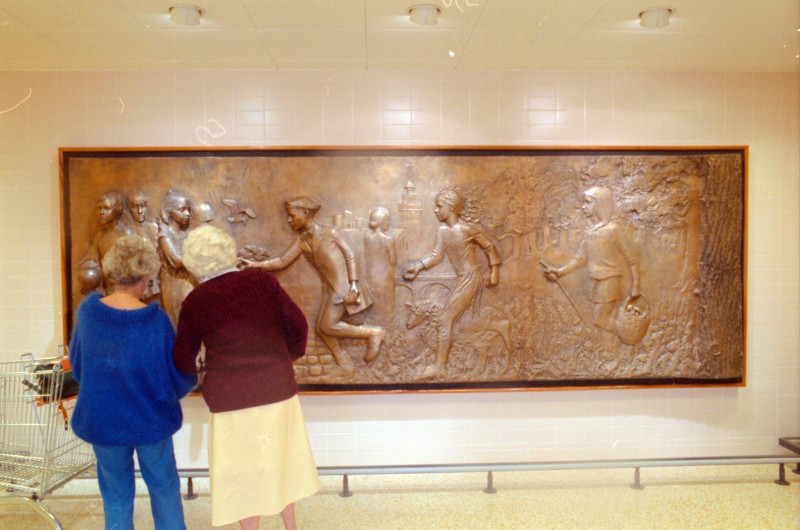 As branches grew ever larger in the late 1980s and 1990s, architects recognised a greater need to enliven expanses of plain brickwork with art. At Warlingham in Surrey, ‘JS Journal’ noted, customers were ‘welcomed by a splash of colour at the entrance where a 155,000-piece mosaic charts the changes in Sainsbury’s through its 125 year history’. The same technique was used at Biggleswade to produce a vibrant composition showing local birdlife. 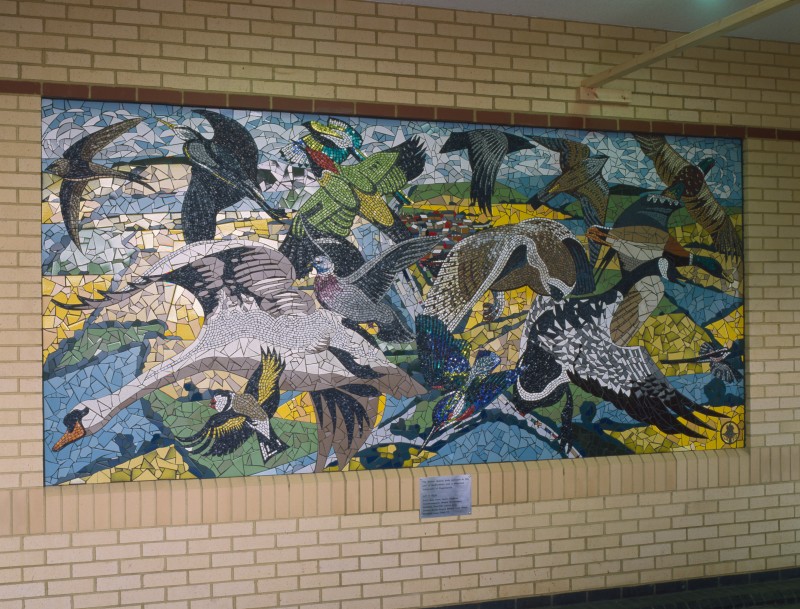 At other branches artists used the ubiquitous brickwork in their designs. Examples include Wilmslow, which illustrated the local legend of the wizard of Alderley Edge, and Doncaster, where horse racing’s St Leger Stakes was the subject of one of four brick friezes. Richard Kindersley, well known for his lettering as well as sculpture, created a piece for Northfleet branch in Kent incorporating everything from Roman influences to watercress picking and the local cement industry. 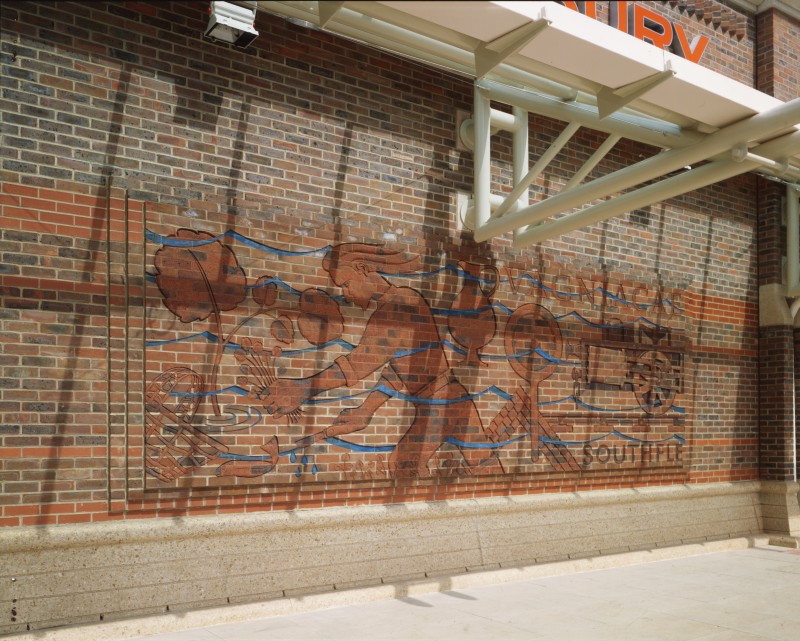 Although murals and reliefs predominated, Sainsbury’s sporadically continued to commission freestanding sculptures. Unlike the work which stood in front of the Chelsea branch in the 1960s, the concrete hippopotami placed outside Southampton’s Lord’s Hill supermarket in 1977 presented first and foremost a playful image. Placed directly on the ground, rather than plinths, they were made for clambering over by children (and the occasional branch staff member). 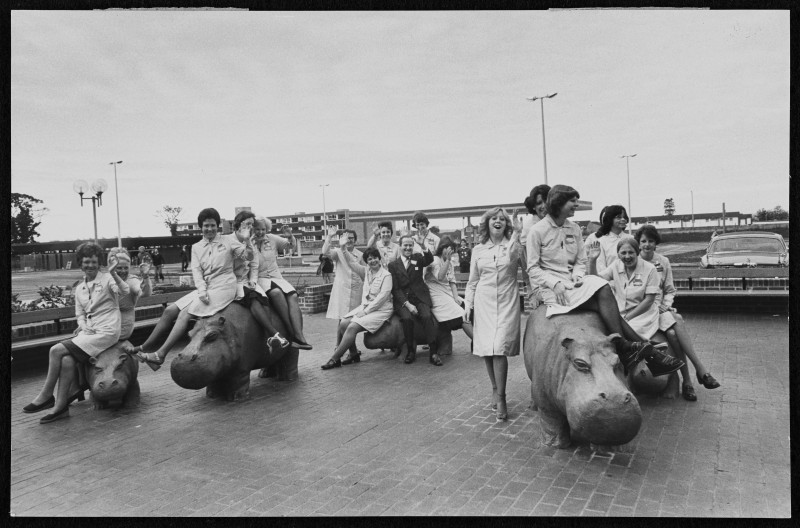 Although popular with the local population the hippos were, like many types of public art, subject to vandalism. Unfortunately, ‘trouble started within two weeks of the opening of the store’, as people stole ears from the sculptures. ‘JS Journal’ reported that ‘The ears, the only weak point in the robust concrete and fibreglass effigies, have been glued back on several times, but such is the appetite of the local youth for natural history that they disappear as fast as they are repaired.’ Similar hippos installed outside Worle branch the following year had ears ‘redesigned to resist the attentions of vandals’.

Perhaps in light of this experience, it seems it was a while before the next freestanding sculpture was installed outside a branch. But by the late 1990s there were several new examples, which can still be found today. Some are lifelike representations of human figures and animals with local meaning. A 7-foot tall fisherman sculpted by John Ravera stands beside the entrance to a branch in Ipswich, for instance, while at Calne two bronze sheep greet customers, along with ‘corn circle-style motifs in the brickwork outside and Celtic designs in the walls’. 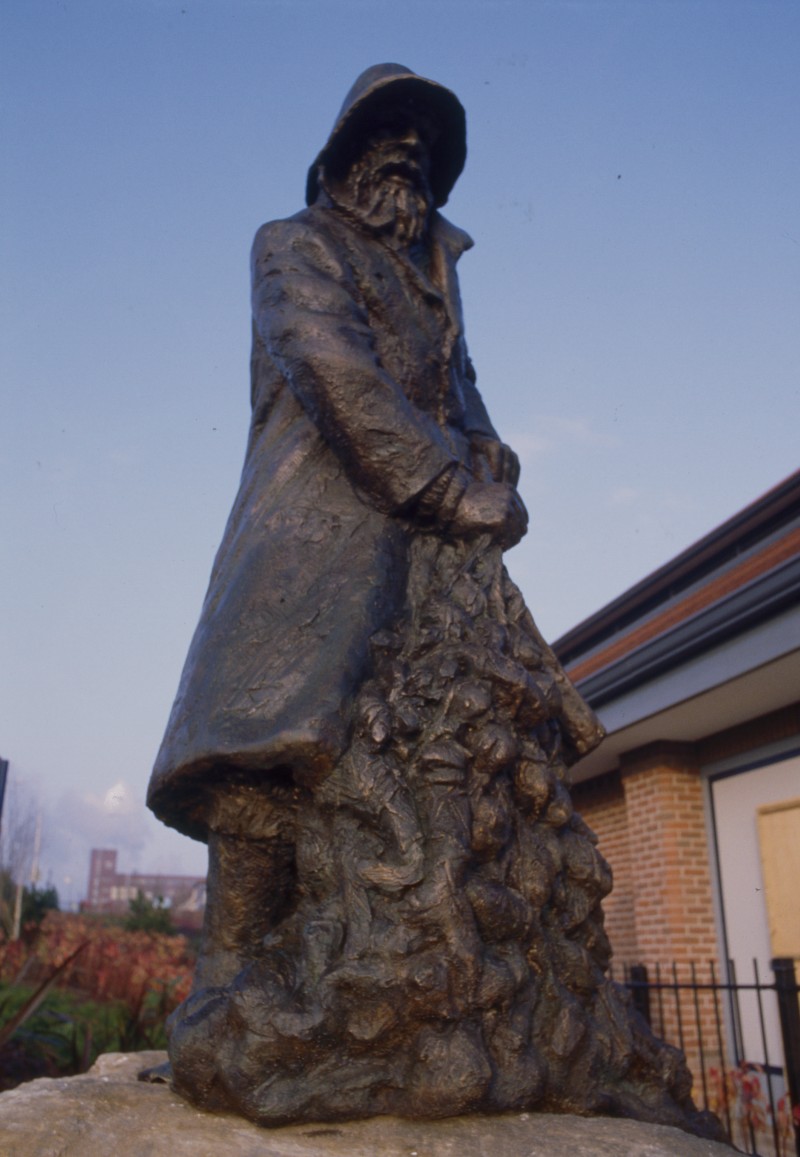 Elsewhere there are more symbolic or abstract sculptures. Shoppers approaching Pinhoe Road, Exeter branch see life-size sheet metal figures running through standing stones. Their creator, Ray Smith, explained that ‘The figures are shown running through granite – an impenetrable material – with speed and fluency: a clearly impossible feat. The sculpture invites speculation at the way in which we set ourselves goals and attempt to achieve them, however insurmountable the odds.’ Cornish artist Max Barrett also used granite in his work for Truro branch, carving a 10-ton granite block into a sculpture representing ‘the meeting of the elements’. 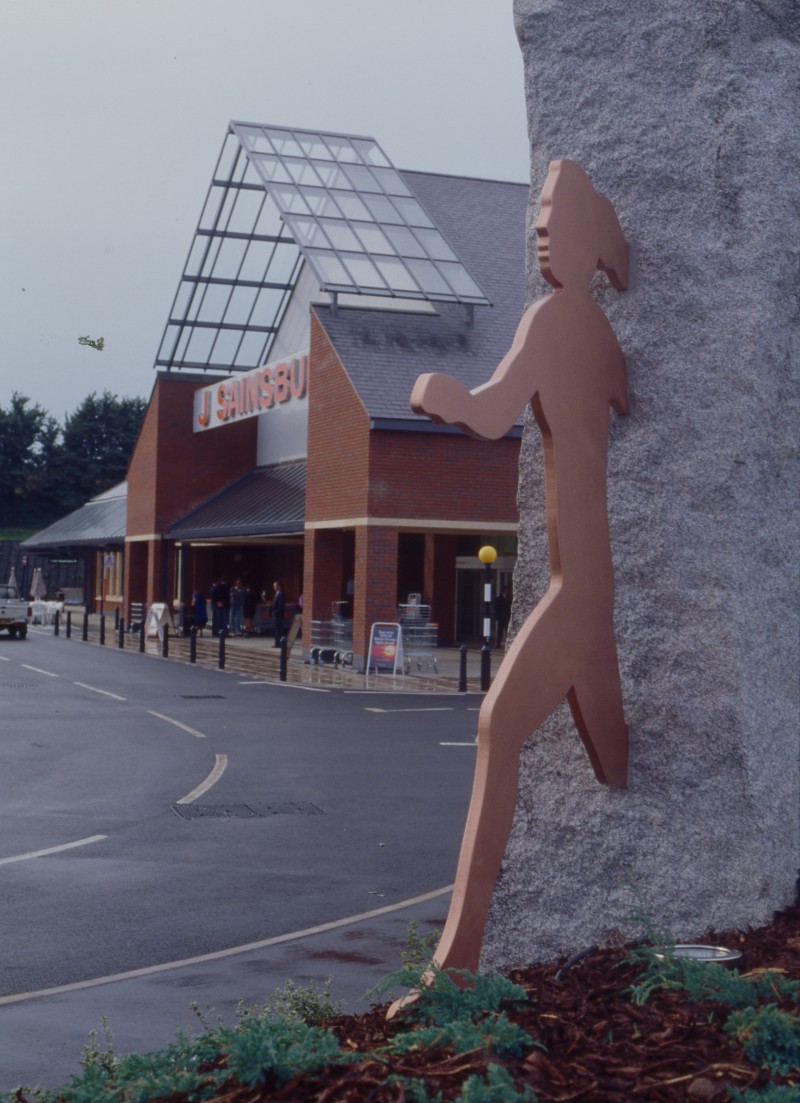 If you have information or memories relating to any of the artworks mentioned in this article, or others connected to Sainsbury’s not included here, we’d love to hear from you. Please leave a comment below or add a photo to our Memories section.