The company rapidly expanded from these humble beginnings and by 1910 they had 109 shops and sold around 200 products including a wide range of groceries and meat. Dairy products however remained very much a core part of the business especially butter which was the focus of much of the company’s advertising in the first half of the 20th century. The quality of the product was always emphasised in advertisements like this one from 1935. 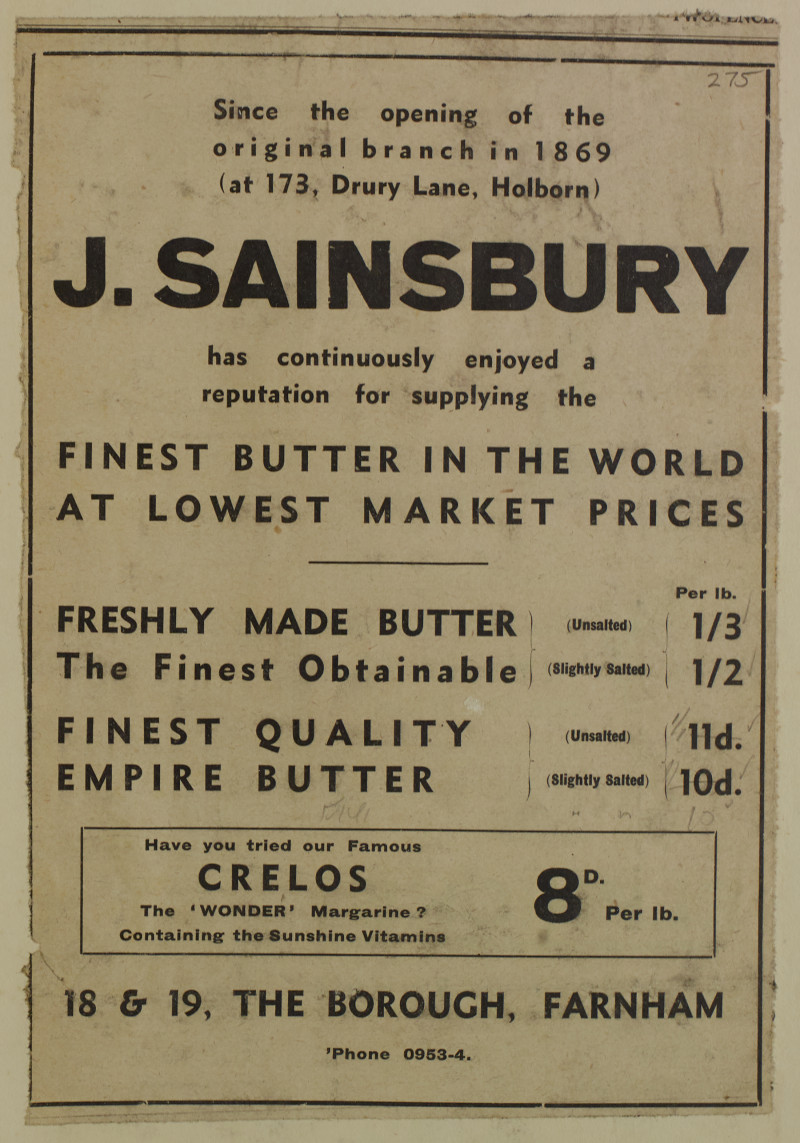 Butter was delivered to the shops in bulk in large boxes or wooden casks. A sample was tested by the ‘first butterman’ (the senior employee on the butter counter) to ensure it was satisfactory and it was cut into blocks with a wire and taken to the counter ready to be sold.

At the counter the customer would state the weight of butter they required and a portion would then be prepared and wrapped for them individually. The ‘butterman’ would use a wooden beater and slice (as seen in the picture below) to work the butter into the correct weight – this was called ‘knocking up’. The grooved beater was used to hold the butter firmly and the slice was used to cut it to the correct weight. The slice had a fine edge which was sharpened with a piece of glass. The butter would be worked upon, adding or removing pieces until it was believed the correct weight had been reached and then weighed on the scales to confirm the weight. If the weight was not correct it would be reworked. An experienced butterman needed only one or two attempts to achieve the correct weight. It was then wrapped and labelled. 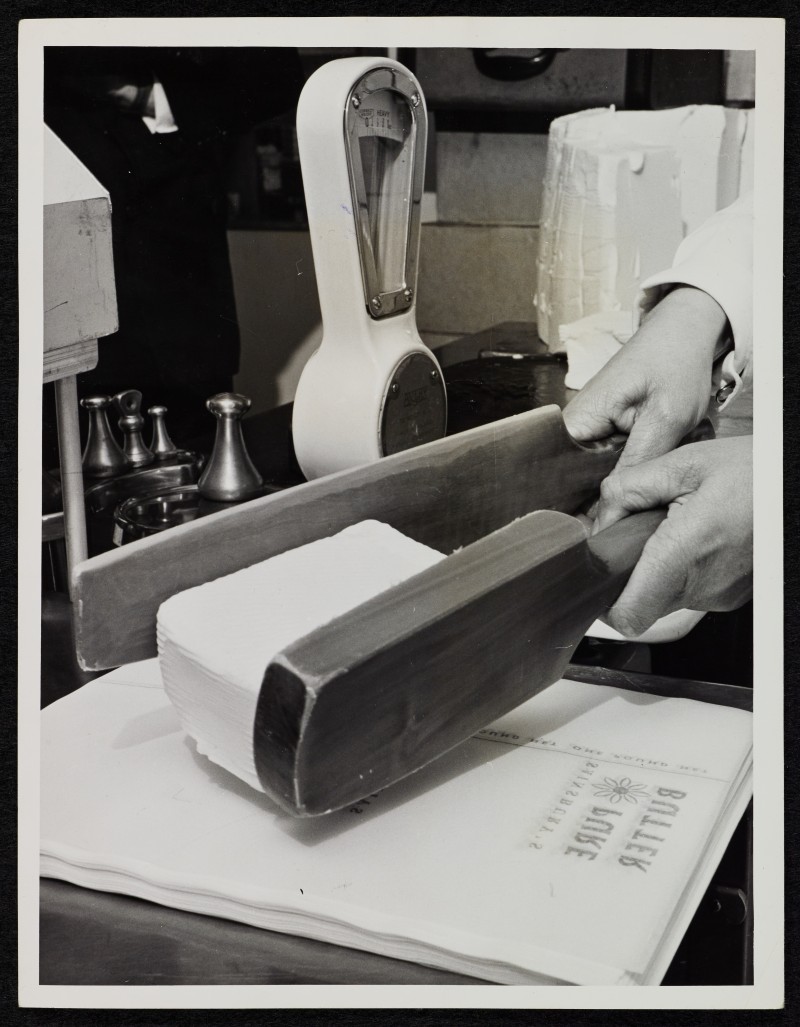 Margarine as an alternative to butter also became one of Sainsbury’s principal products. It was first invented in 1869 by French scientist Hippolyte Mège-Mouriès initially in a contest to develop a cheaper substitute for butter to supply the French navy but over the next few years and decades it developed into a popular product and major competitor to butter.

John James Sainsbury formed close business links with a leading Dutch margarine manufacturer and exporter, the Van Den Bergh family, during the 1890s, and this became a family connection with the marriage of John Benjamin Sainsbury to Mabel Van Den Bergh in 1896. 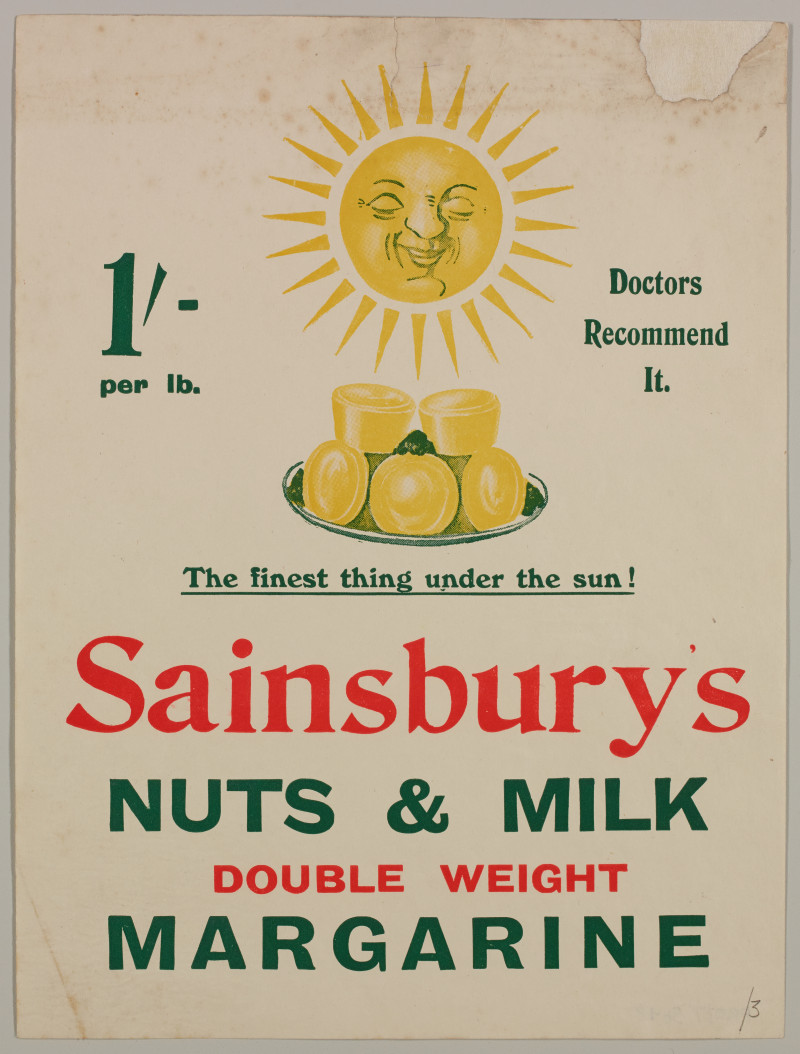 Margarine wasn’t as important to Sainsbury’s business as it was to some other retailers however, and they retained a bigger interest in butter.

During the two world wars the supplies of butter however were badly affected and margarine now needed to play a more major role in the nation’s diet. At the start of the First World War most butter (like several other foods) was imported, which was a problem – the country’s shipping was now needed to help with the war effort. Sainsbury’s like other retailers encouraged people to buy margarine, and launched a major press advertising campaign to promote Crelos margarine. 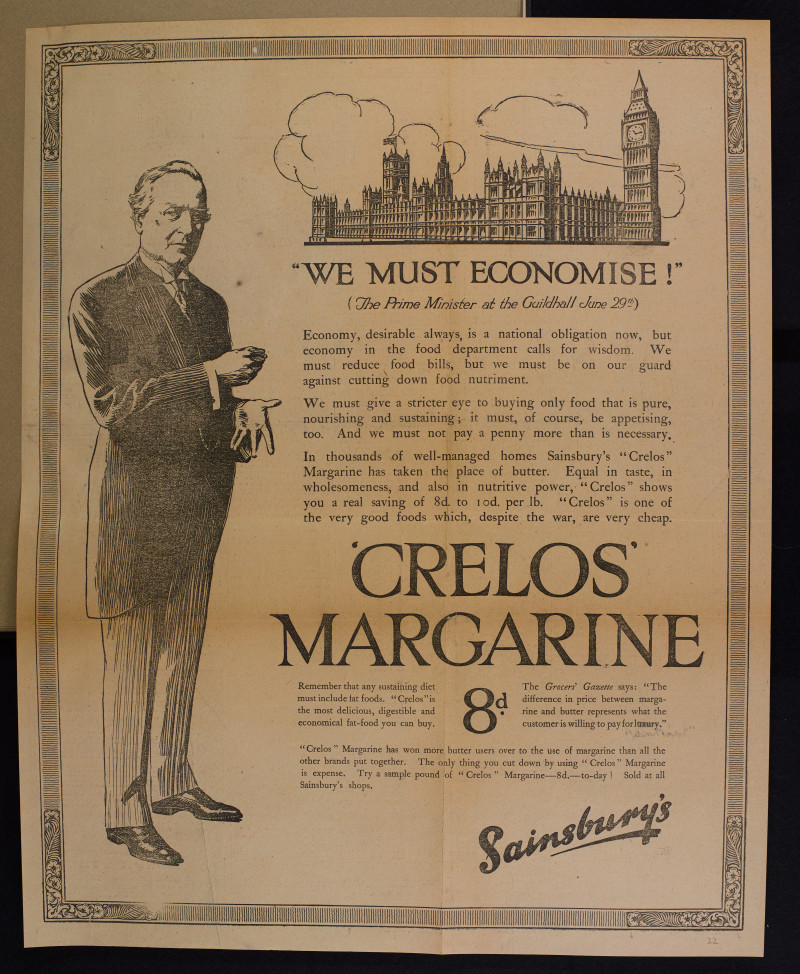 In the Second World War again there were shortages of butter and rationing was introduced to ensure the limited supply was fairly shared. Margarine was also rationed but the margarine ration was larger than that of butter. The Second World War meant an end to Crelos and other own brands of margarine to be replaced by a standard product regulated by the government. Continued shortages meant this was the case until 1954 when controls were removed allowing the return of the ‘Crelos’ brand.

Both butter and margarine were often promoted in window displays at Sainsbury’s shops like the one below in St Albans. If you look closely you can see the ‘margarine roses’ which were common in these displays – portions of margarine carved to look like a rose. The margarine of the time was much more solid than the spreads of today, which enabled such impressive displays to be made. 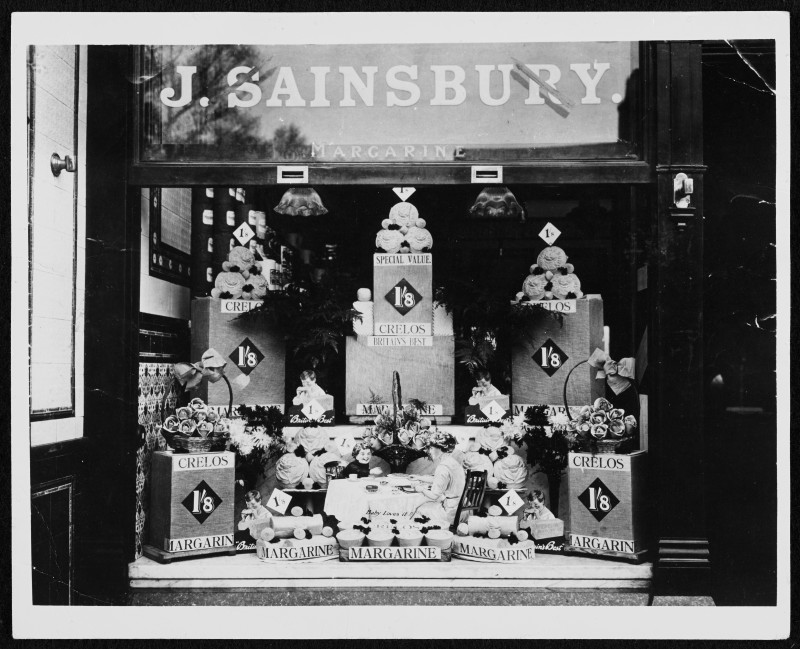 Self service and the end of the butter counter

From the 1950s, the traditional butter counter began to decline with butter becoming increasingly pre-packaged and sold in a standard portion size.

Self-service (where customers picked their own goods, like in modern supermarkets) began to replace counter service (where customers go to counters to be served by staff) starting with Sainsbury’s first self-service branch at 9-11 London Road, Croydon in 1950. These stores offered the customer the benefit of not having to wait at individual counters to be served and a larger range of goods.

Initially at self-service stores, butter would still be ‘knocked up’ inside each store in the traditional way but hidden away from the public in preparation rooms and ready wrapped in standard sized portions. Increasingly it seems the same practice occurred in counter service shops like at 138-140 Finchley Road branch seen below. Counter service stores were still common for several years (the last one in Peckham closed in 1982) but photos in the archive and JS Journal suggest that refrigerated cabinets were now being introduced similar to those in self-service shops with pre-wrapped butter. 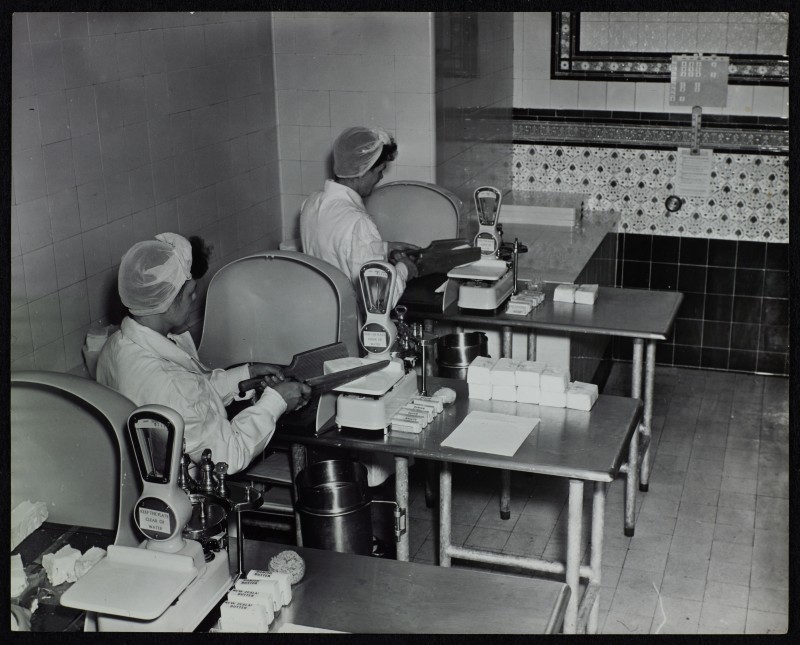 In the mid 1960s however the ‘knocking up’ of butter inside shops ended and all butter was now pre-packaged.

In the late 20th century, margarine and new reduced fat spreads gained in popularity. More easily spreadable soft margarines were first developed in the 1960s. These were typically sold in plastic tubs and quickly became more popular than the harder margarines which were typically wrapped in blocks like butter. A wide variety of these products were now being sold in Sainsbury’s from various suppliers under a range of different brands. Sainsbury’s also introduced a variety of own-brand margarines and other spreads. 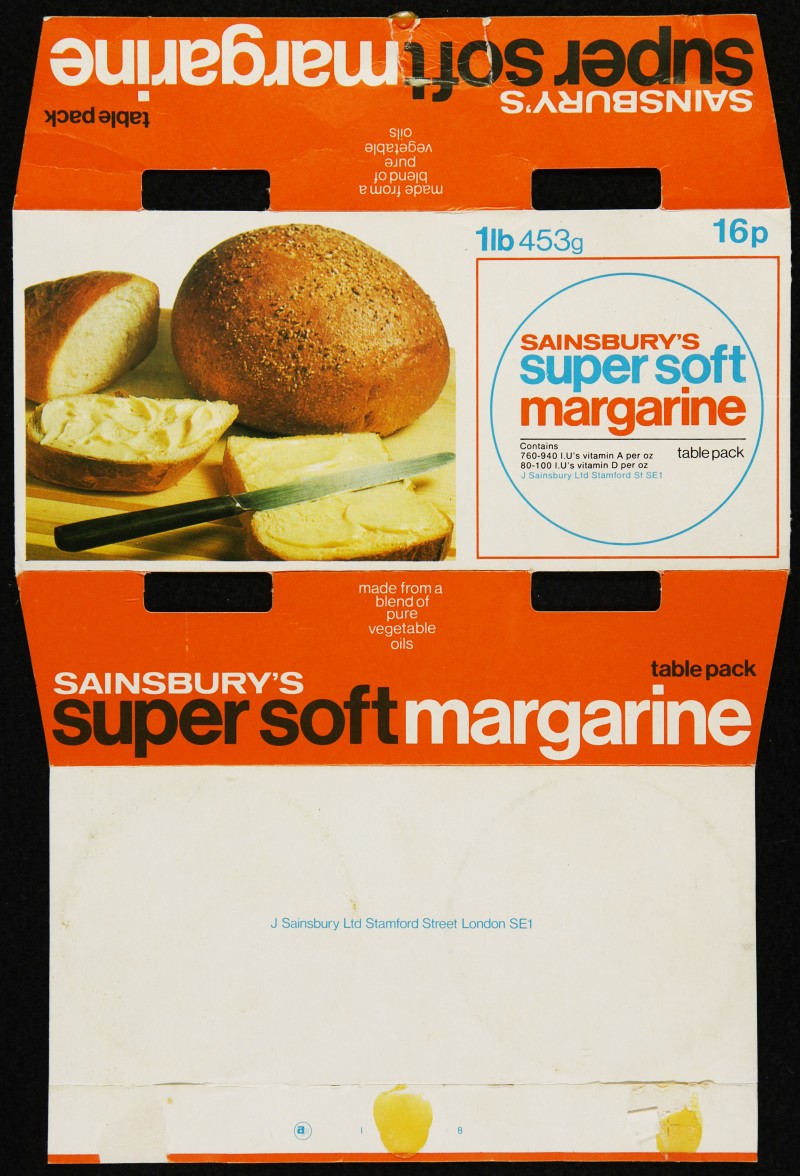 In 1980, margarine replaced butter as the most popular fat in the UK diet. However from the late 1980s margarine began to decline, with ‘reduced fat spreads’ and ‘low fat spreads’ gaining in popularity. While these spreads are often referred to as ‘margarine’ this term is legally defined in the UK as a product containing a minimum fat content of 80%. The number of products sold which met this definition declined and today it appears that there are no mainstream products labelled as ‘margarine’ in UK supermarkets. 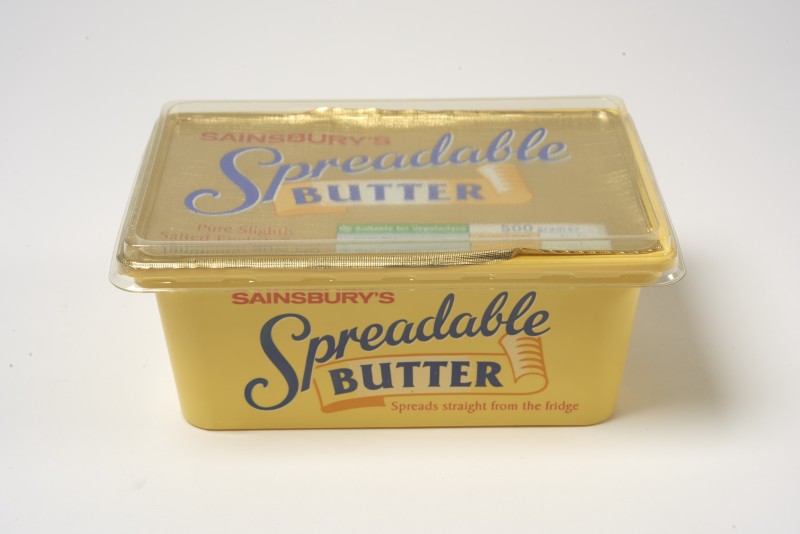 Traditional butter in blocks however never went away. There has in fact been a bit of a revival of butter recently - during the 2010s sales in the UK of butter (block and spreadable) grew a little while spreads declined.

“The Best Buttermen in the World” JS Journal November 1994

"Roses and all that" JS Journal December 1965