Sainsbury’s first sold turkeys towards the end of the 19th century.  The earliest price list to mention them is dated 1895, when the most expensive turkeys were just 1s 1d per lb. In the days before refrigerators, customers left the purchase of perishable goods for Christmas, especially poultry, as late as possible, and the week before Christmas was by far the busiest time of year for Sainsbury’s staff – stores typically sold 1000 - 2000 turkeys.  Work on the preparation of poultry began two days before Christmas, and would usually go on all night, with breaks for a sausage and mash supper, and a wash, shave and breakfast before the shop opened again the following morning. Turkeys arrived ‘rough plucked’ – with soft feathers still attached – to keep them fresh, and it was the job of junior staff to ‘clean pluck’ the birds.  The 24 working prior to Christmas meant many Sainsbury’s staff were too tired to enjoy their own Christmas dinners – but it was customary for everyone involved to receive double wages for the week. 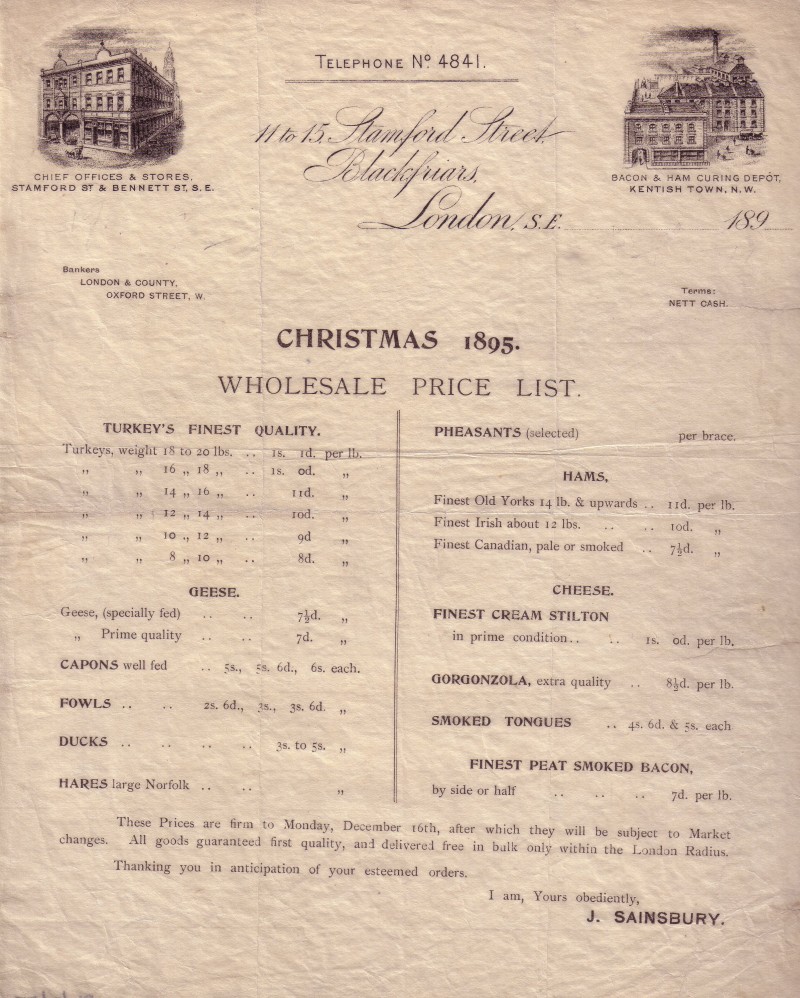 Lavish window and interior displays of Christmas foods such as poultry, cooked meats and cheeses were also an annual tradition. Work on the display would usually begin after half-day closing. A former worker at the Norwich Haymarket store recalls: ‘The floor had to be cleaned to perfection with wet sawdust. When the dressing was finished all the lights were switched on and an iron gate locked across the doorway.  At ten pm the staff who lived in had to go down and clear it all away ready for the next day’s trading.’ A display at Norwich c.1900 suggested items for Christmas hampers to customers, including cheese, bacon, smoked breakfast ham, a small plump turkey and a smoked ox tongue. 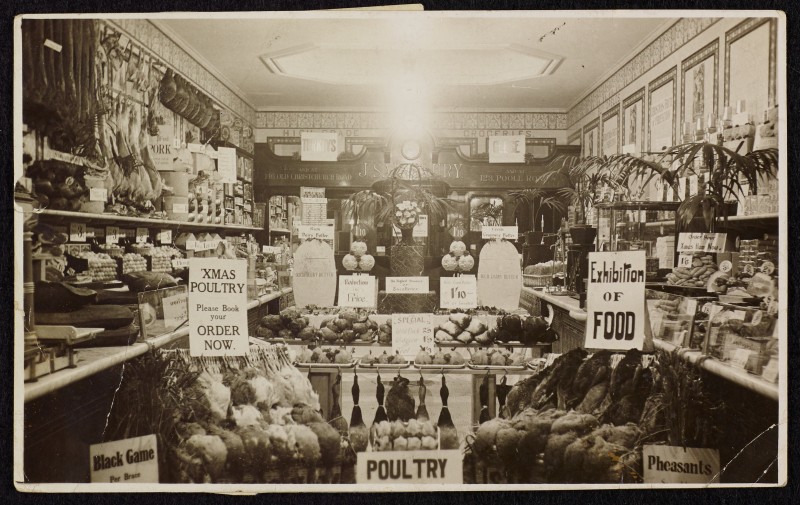 Dried fruits for mincemeat and Christmas pudding as well as ready-made mincemeat and puddings were first sold at Sainsbury’s in the interwar period when the range of groceries was extended.  Shop window displays and newspapers advertisements in November reminded customers to make their puddings in good time. A grocery price list from 1930 includes a recipe for ‘Sainsbury’s Old Time Xmas Pudding’, made with suet, mixed peel, sweet almonds, bitter almonds, currants, raisins, mace, eggs, lemon, almond essence and brandy or whisky.  A note on cooking times states:

Longer boiling brings out the full flavour of Sainsbury’s Christmas fruits.  The recipe calls for seven hours in the pudding saucepan – five when the puddings are made and two just before they are served to the table.  But it will not hurt the puddings if you boil them for eight hours in the first instance.

It is a good plan to make puddings now for Christmas 1931. Puddings a year old are unparalleled in flavour. 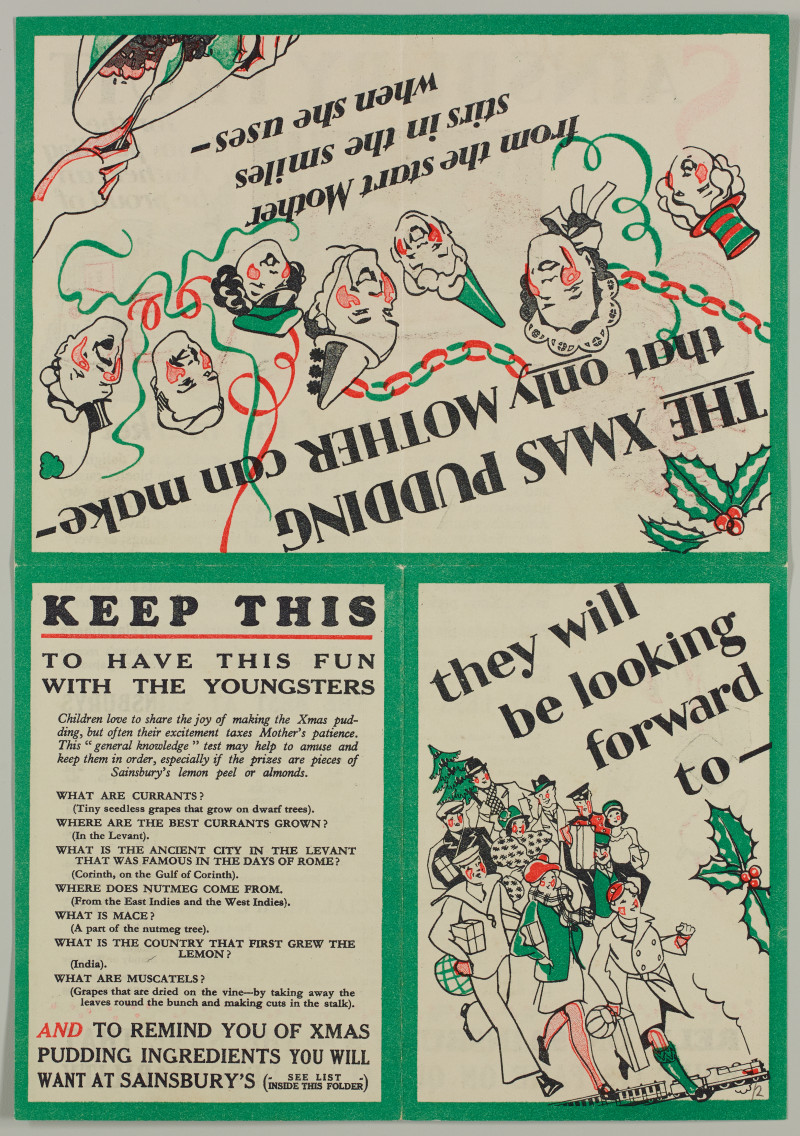 Favourite Comments
SA/MARK/ADV/3/2/1/7/1/1/2 "they will be looking forward to...Sainsbury Fruit for the Xmas pudding Mother can be proud of" leaflet

By 1938, they were advertising ‘if not you cannot do better than buy a ready-made one at Sainsbury’s’. This campaign was extended to Sainsbury’s paper bags, where the slogan ‘Sainsbury’s fruits will make your pudding’ was used. Ready-made mince pies were available from the 1960s. 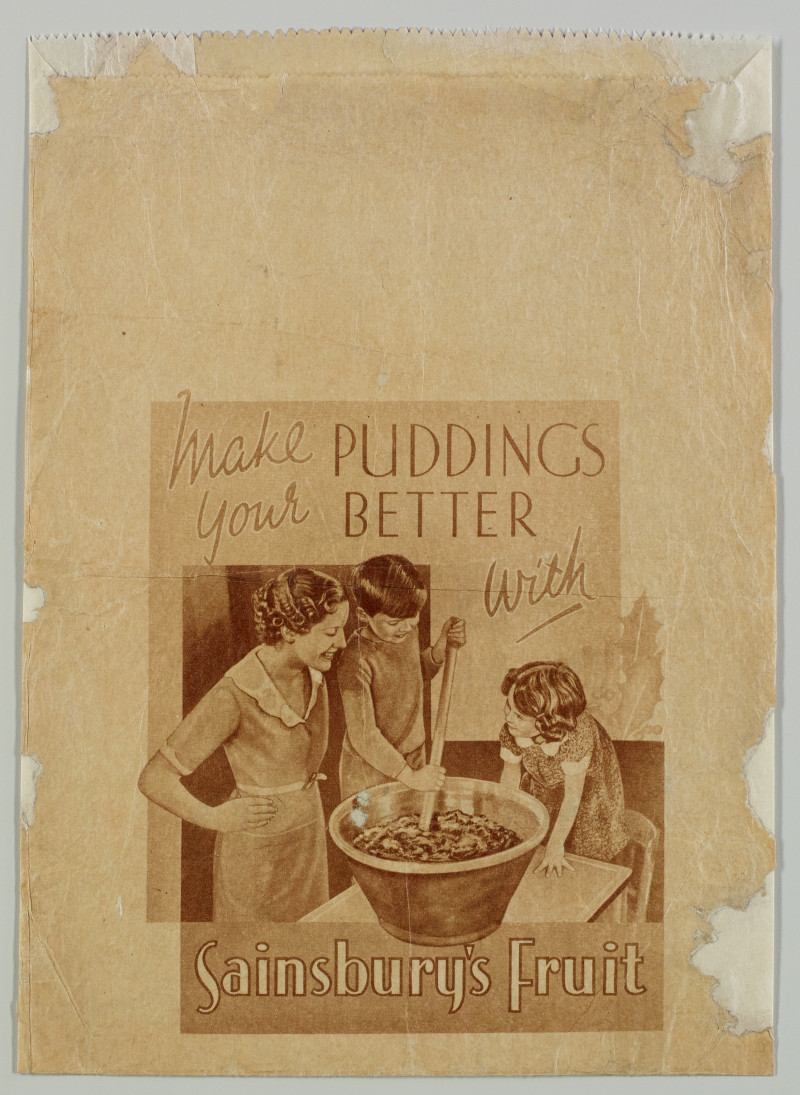 More hams were sold at Christmas than any other time of year.  Decorated with silver skewers and fresh parsley, they stood at intervals along the counter on distinctive china ham stands.  Sainsbury’s hams were supplied by Marsh and Baxter of Brierly Hill, Staffordshire. For the Christmas trade, they were long-cut and sold to customers whole or in halves, cooked or raw.  Orders of ½ lb or more were placed in a white box with green edging and J Sainsbury printed on it, then tied with a green ribbon, finished with a neat loop for carrying it away. 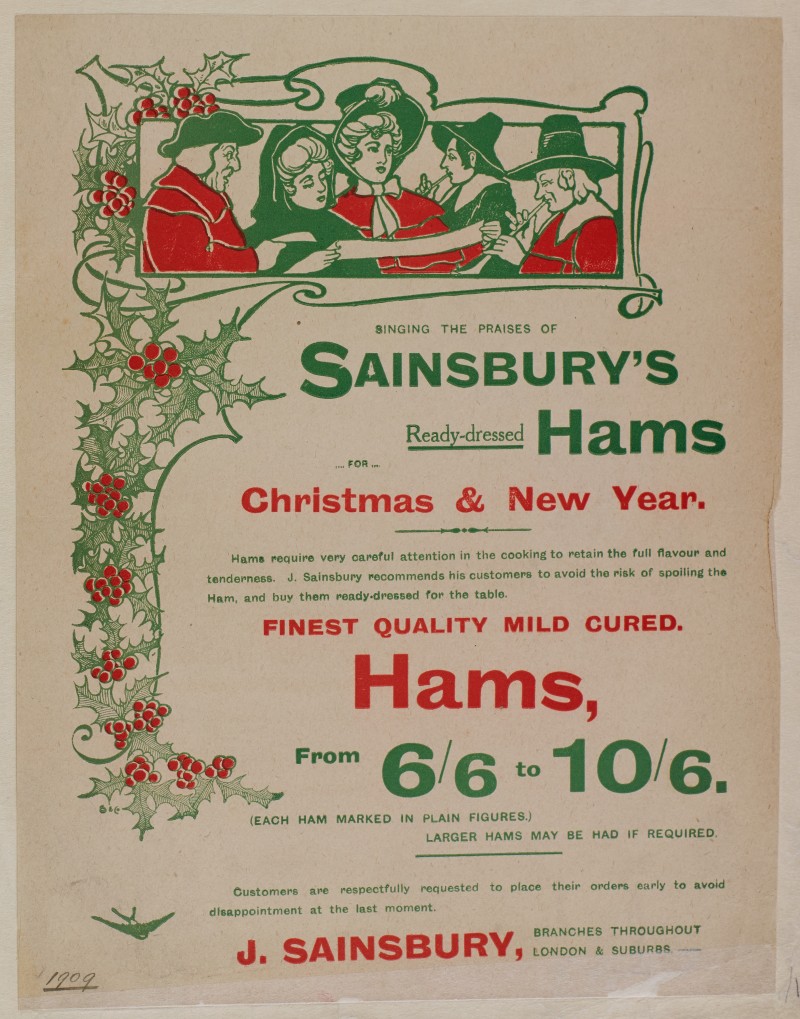 Cheese was one of the earliest products on sale at Sainsbury’s.  By the 1880s, the Victorian cheeseboard could be selected from a dazzling array of cheeses. Stilton, Cheddar and Cheshire cheeses remained favourites: ‘These Cheeses are rich in flavour, and make an acceptable present’. 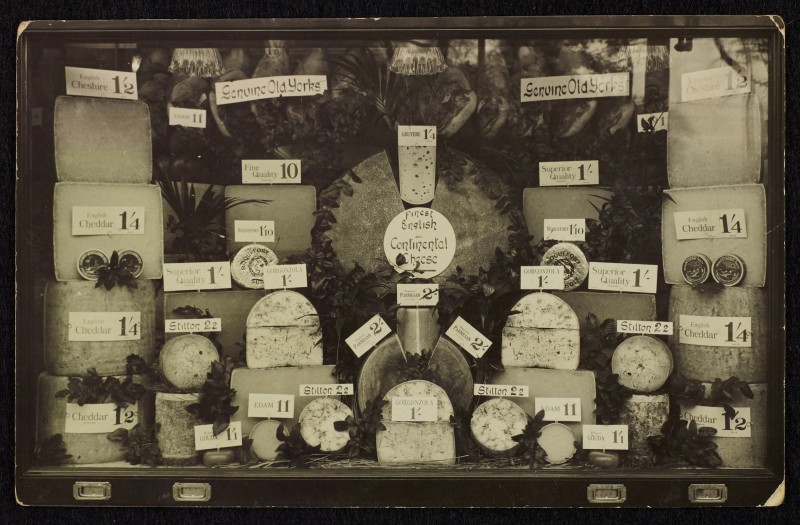 An illustrated Confectionery price list from 1935 shows the range of foods from around the world beautifully packaged products for Christmas: from the traditional Christmas puddings and mincemeat to glace fruits, Chinese stem ginger, Tunis dates and Turkish figs. Biscuits and chocolates in decorated tins and ‘fancy boxes’. A 1938 brochure also lists chocolate assortments in tins, with imaginative names such as ‘Daydreams’ (2s.6d), Westminster (2s.), Carnival (1s.6d) and Lagoon (1s.3d). 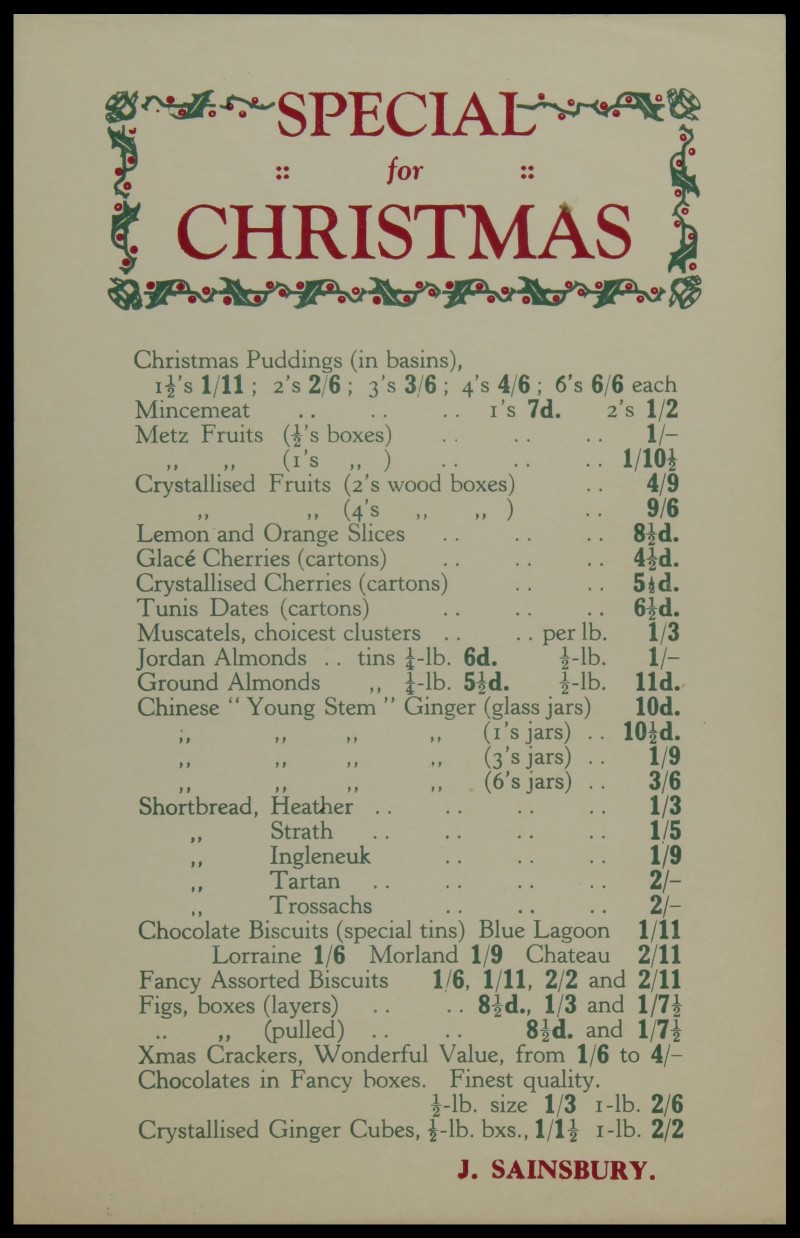 A 1916 price list advertises ‘TEA Finest Indian and Ceylon 7lb CANISTERS each 16/4 A POPULAR GIFT’.  The only actual example of early Christmas packaging that we have in the archives is a 1930s decorated tea caddy designed to hold a 1lb gift pack of Sainsbury’s finest quality blend, Blue Kaddy tea. 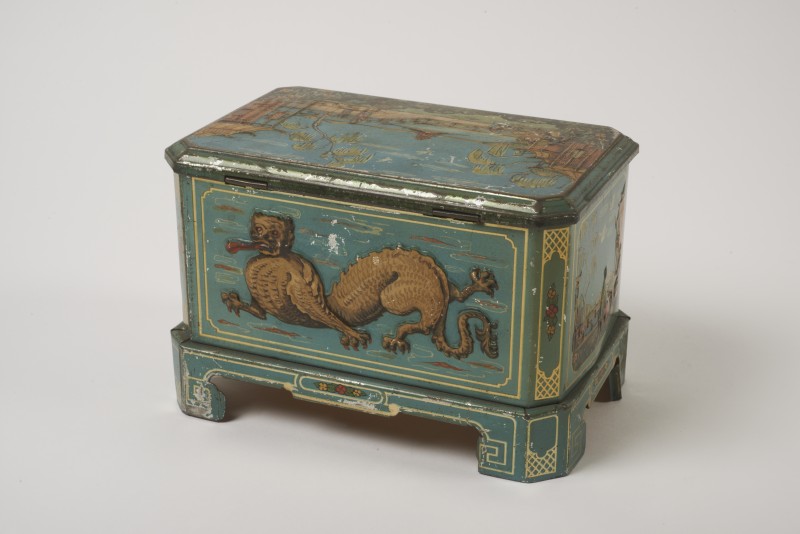 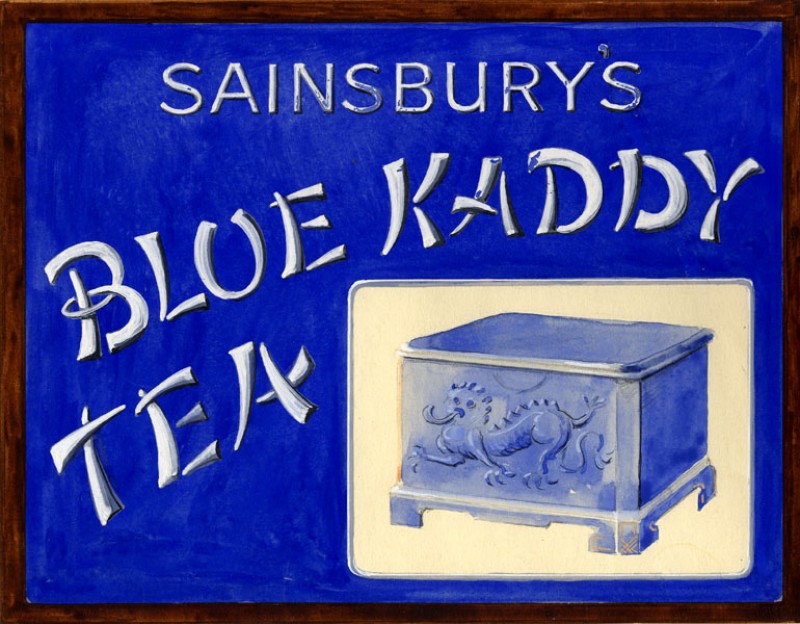 Christmas crackers were on sale from 1935, when they were described as ‘wonderful value’ at 1/6 – 7/9 a box; a 1939 advertisement for crackers stated: ‘For years everyone has gone crackers about our crackers and no wonder!  They are London-made, for one thing, so that they don’t fizzle in that drab foreign fashion, but go off with a proper CRACK.  Then they make the prettiest, gayest Christmas decorations you could wish for.  And finally- this is what you really want to know – they are double filled!  Boxes run from 1s.9d to 5s.  And run’s the word – for these days you have to be quick if you’re going to get all you want.’ In fact with wartime shortages and rationing, crackers were not sold again until 1946. 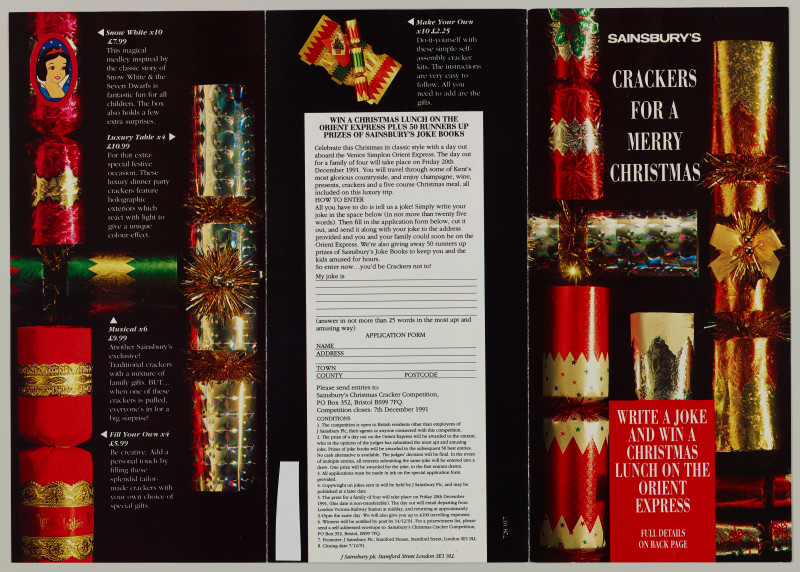