Sainsbury’s began selling tea in 1903. Existing customers who tried it quickly came to appreciate its quality and value. But the company wanted other ways to attract new shoppers into its growing number of branches. A common method was to offer free gifts to customers, often on the anniversaries of branch openings. 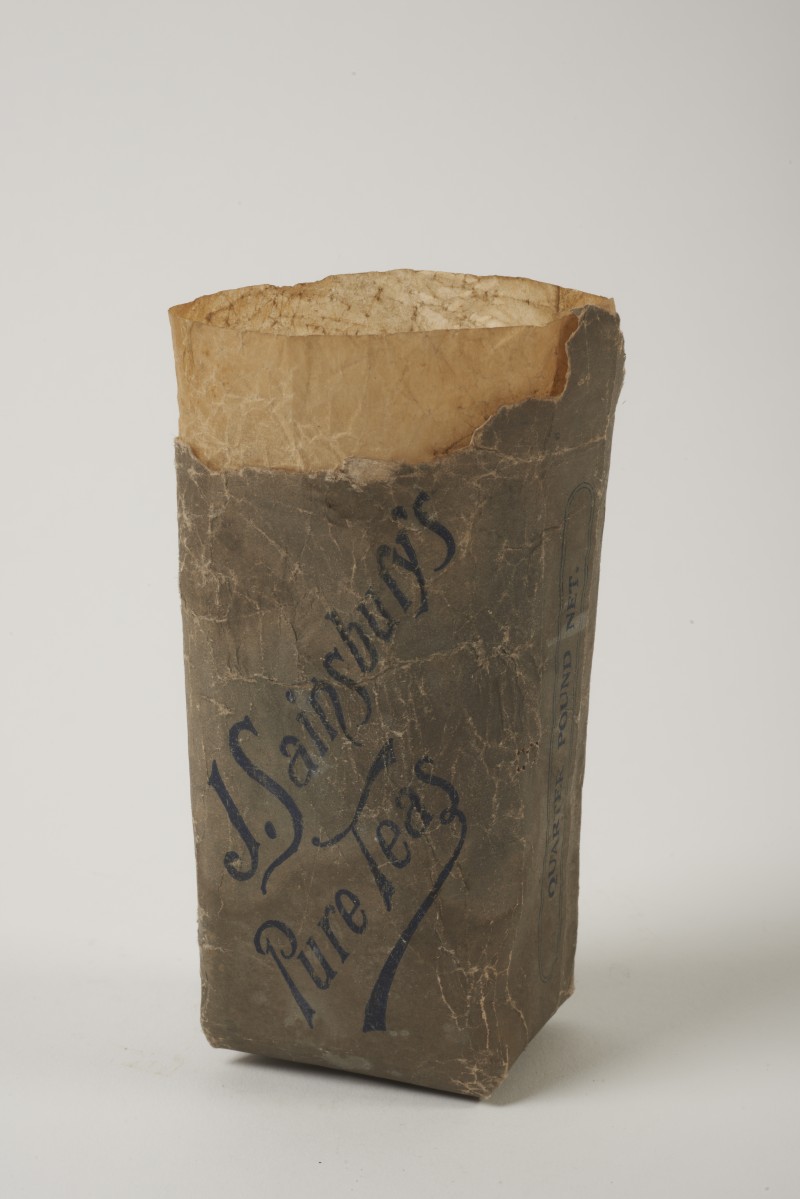 Around 1905 Sainsbury’s commissioned a series of beautifully illustrated postcard-sized cards depicting well-known fairy tales, and gave them out for free with packets of its Pure Teas. The idea was that customers would buy tea regularly in order to collect all the cards. 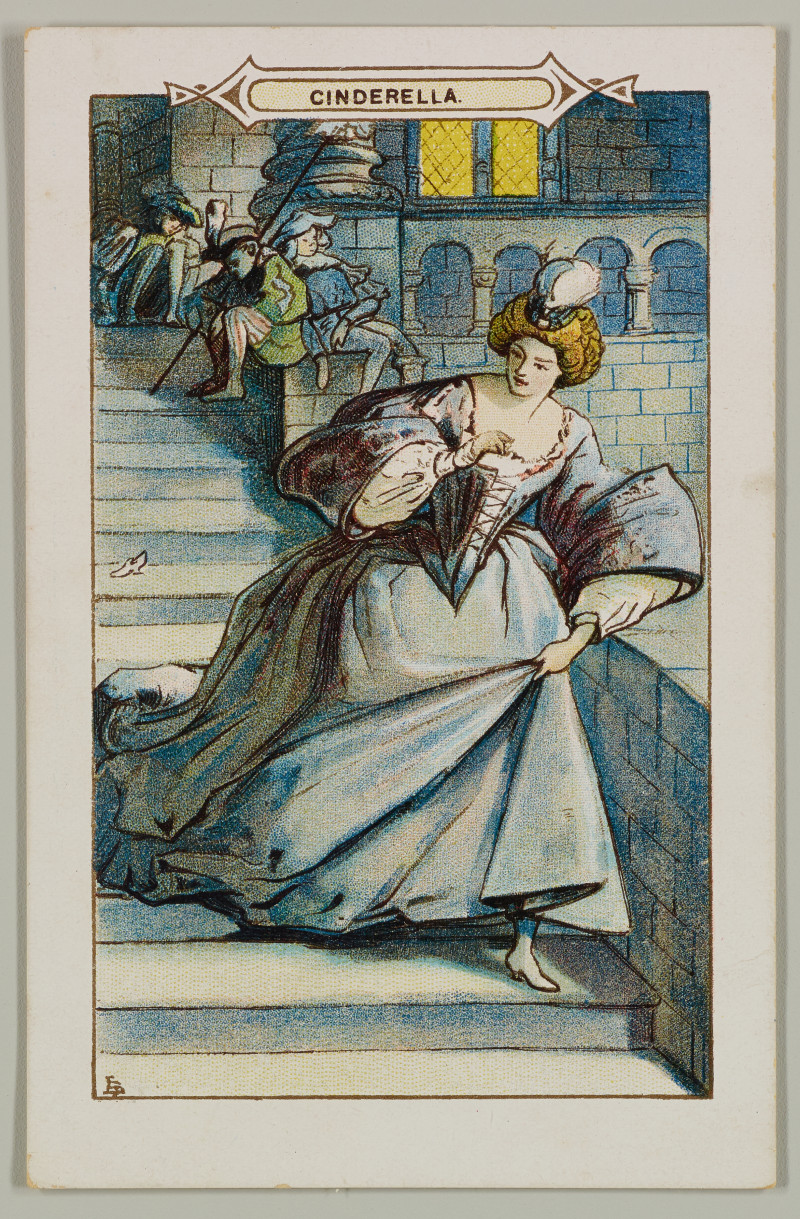 The success of this strategy is clear from the memories of an early customer’s daughter: ‘each Friday afternoon my mother would meet me from school, from where we went to the Redhill branch of Sainsbury's to buy the weekly groceries. For me the most important item was the packet of tea containing an instalment of a fairy story. I would wait in an agony of suspense until we opened the packet on leaving the shop.’ 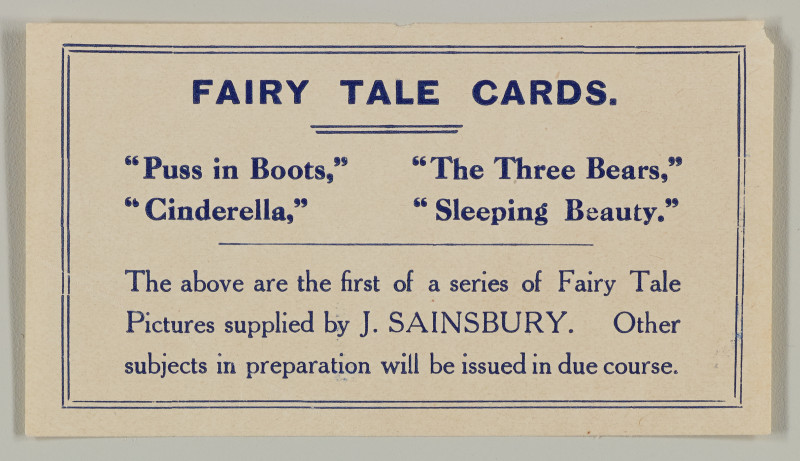 In all the Archive has six sets of fairy tale cards. Each story is told across six cards. Although the artwork is similar throughout, some sets differ in the design of their borders and only ‘Little Red Riding Hood’ features captions written on the pictures themselves. This suggests that they may have been produced at a slightly later date. 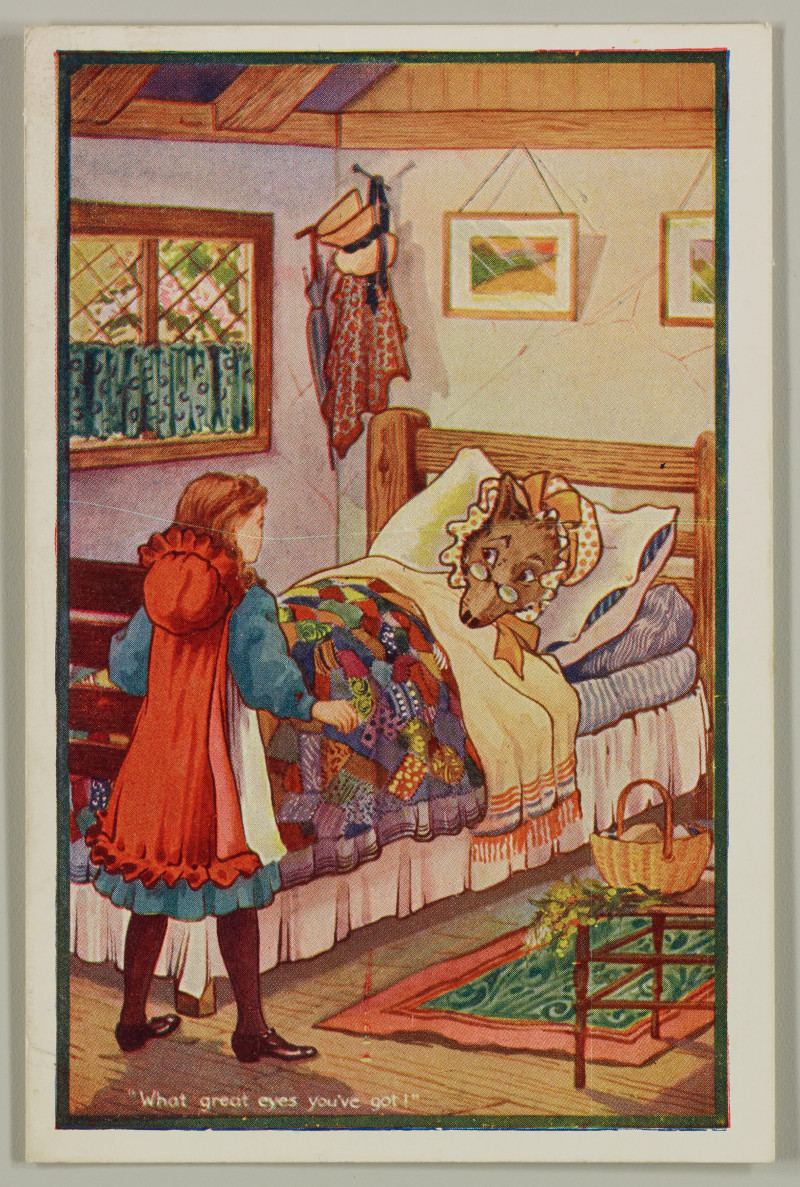 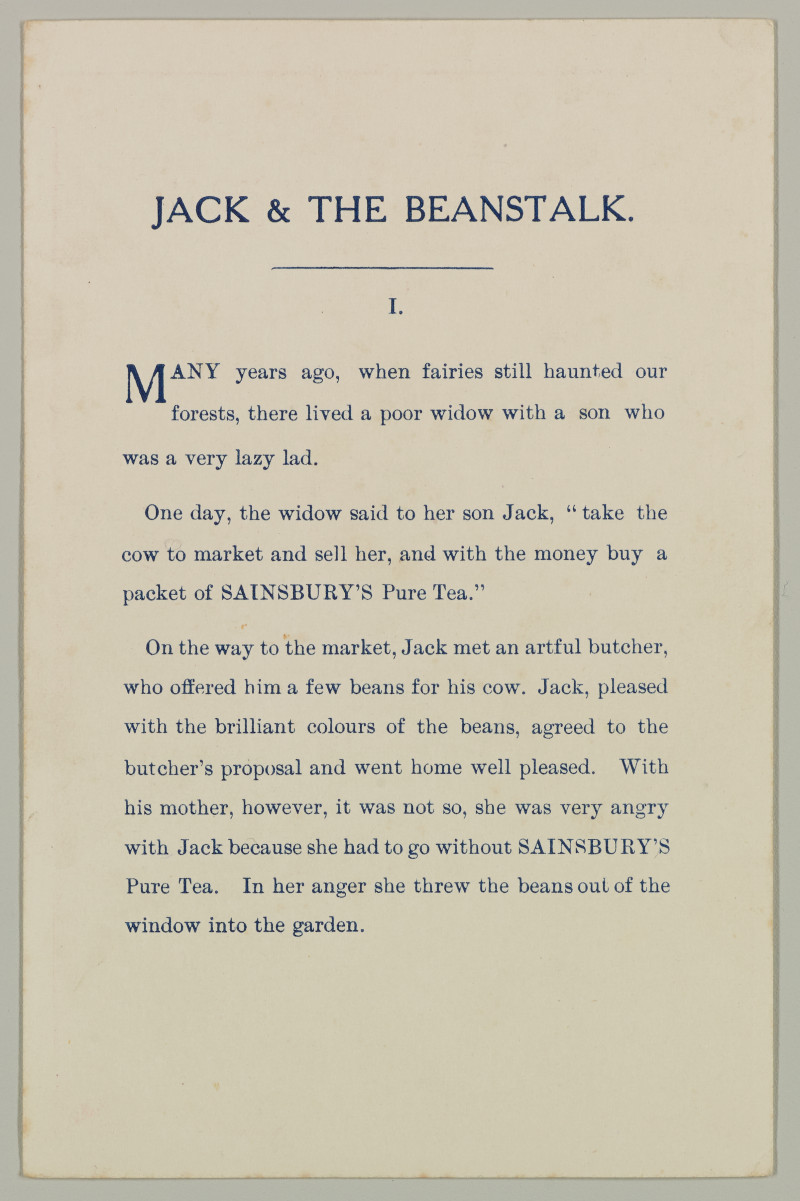 As well as the cards the Archive has a sheet of pictures from various fairy tales to colour in. This also includes a prominent message relating to Sainsbury’s tea. 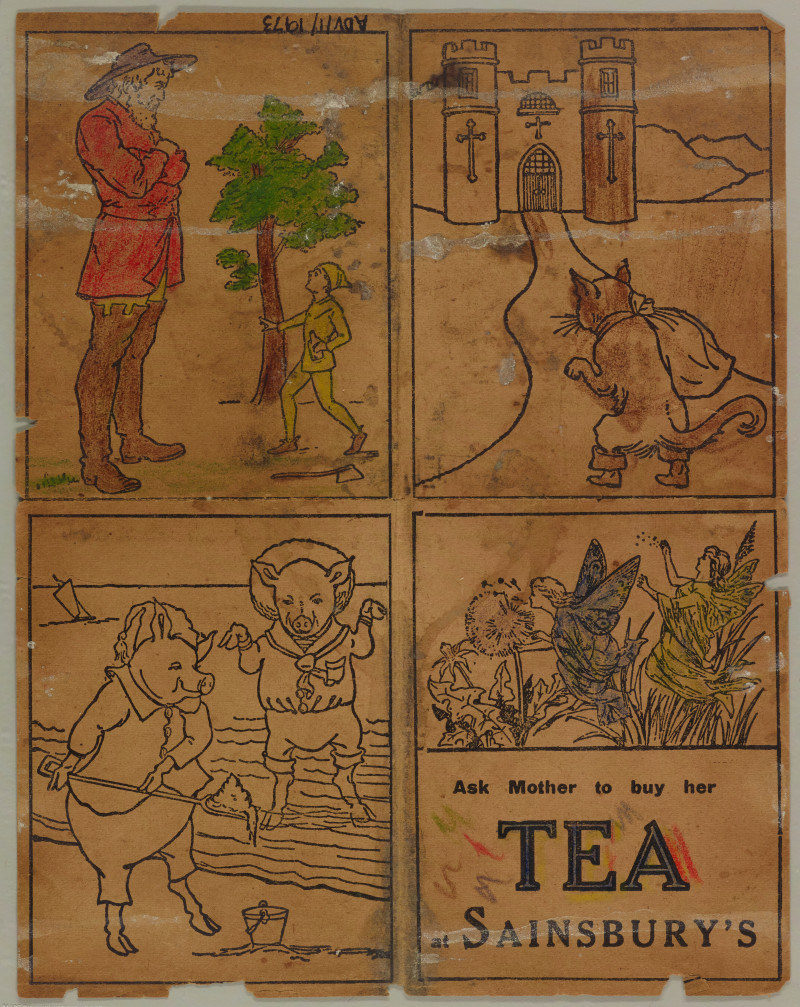 Sainsbury’s did not use fairy tales just to promote tea, either. A booklet telling the story of Snow White ends with a full page advertisement for Sainsbury’s Crelos Margarine, although there is no mention of Snow White or the seven dwarfs enjoying this product themselves! 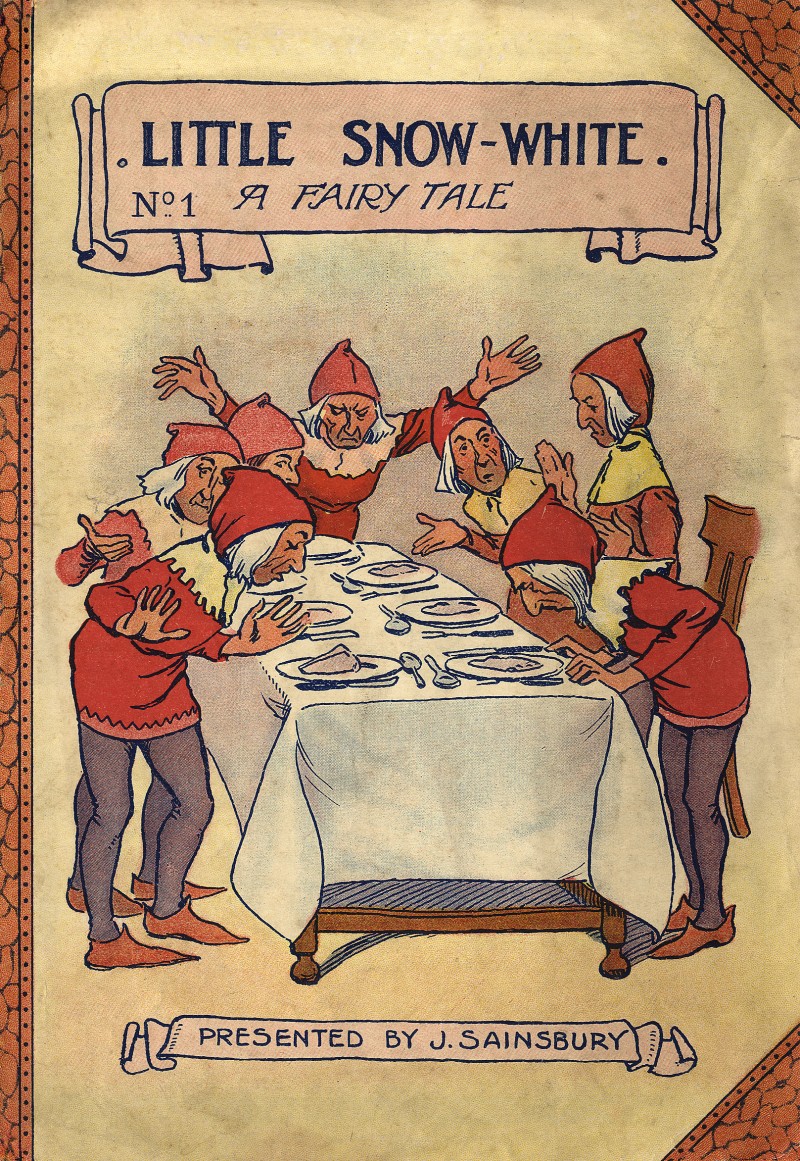 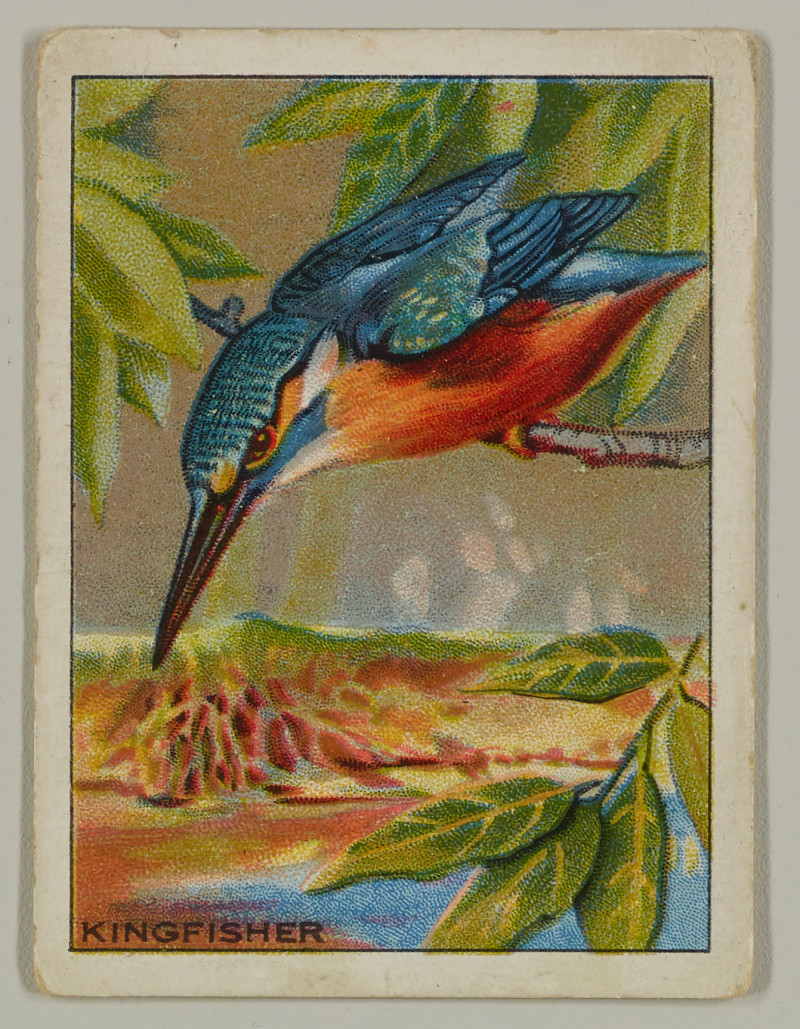 The back of each card mentions a ‘Tea Picture Prize Competition’ and notes that free albums were obtainable from Sainsbury’s, but unfortunately we have no further evidence of either. 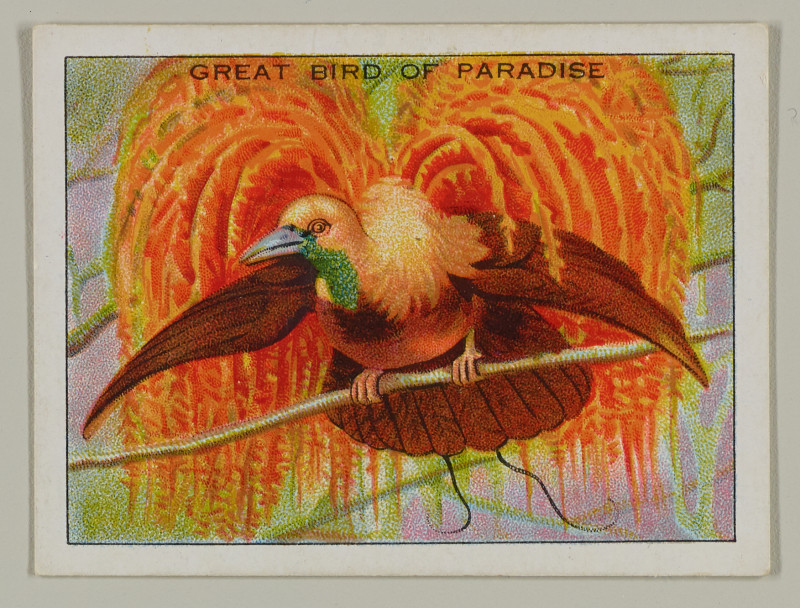 The tea cards are among the most memorable items in our collection, but there is still much we don’t know about them. If you have more information or other examples of early Sainsbury’s promotional material, we would love to hear from you!