In the early days of Sainsbury’s, before electricity and refrigeration techniques, keeping goods cold was very difficult but also very important. In the shops, the only refrigeration available was an ice-box in the basement.

However in 1949 Alan Sainsbury and another Sainsbury’s director Fred Salisbury were despatched to the US by the UK government as part of an initiative to promote improvements in food retailing methods. Part of their remit was to study the display and sale of frozen foods, but they were also inspired by the potential of self-service trading and the visit led to the opening of the first self-service Sainsbury’s store in Croydon in 1950. 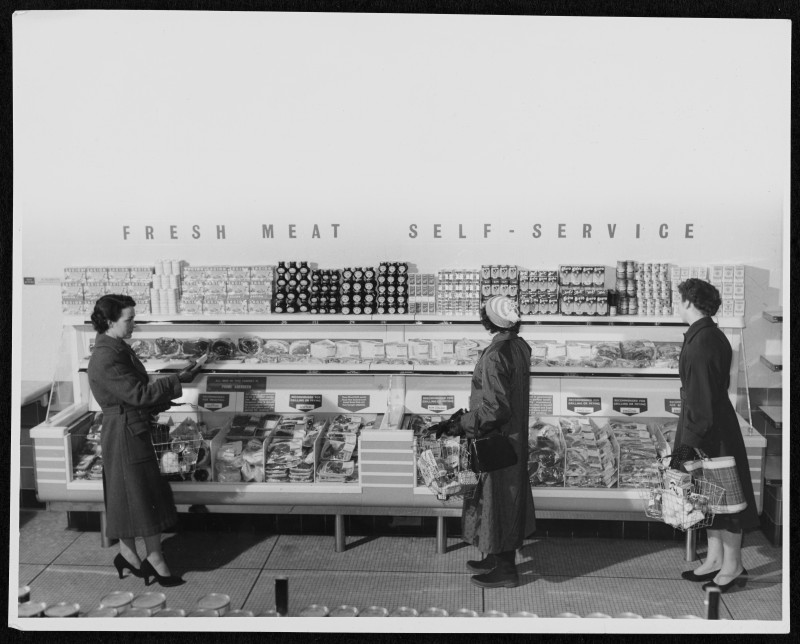 Sainsbury’s pioneered a new type of open-topped refrigerated cabinet in its self-service stores, designed in-house by the company’s Chief Engineer, Ralph Hall.  Prior to this, only a few Sainsbury’s branches had been equipped with refrigerated bins, known as ‘coffins’ in which a small range of frozen foods such as peas and ice cream were kept. The new cabinets allowed for greater quantities of frozen foods to be stocked and for the range to be expanded – a wider variety of frozen vegetables, fish and desserts began to be available, and in 1958 Sainsbury’s launched a successful campaign, including its first TV adverts, to promote frozen chicken as an affordable meal option. 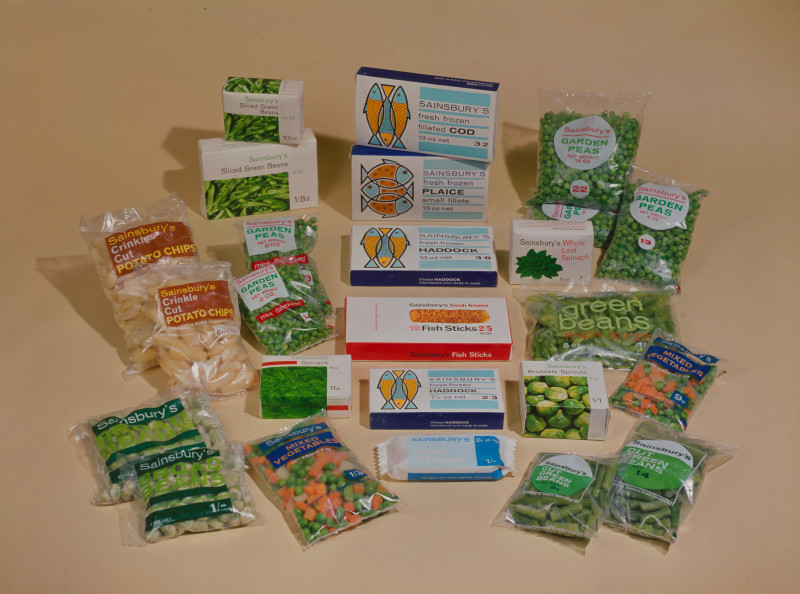 The storage areas behind the scenes were brought up to speed with new preservation technology. The chilled cabinets allowed goods to be kept fresh until they reached the shelves, but the preparation areas also needed high levels of attention. Whole chilled rooms were developed so meat and dairy products could be prepared and wrapped in cold surroundings which made them last longer 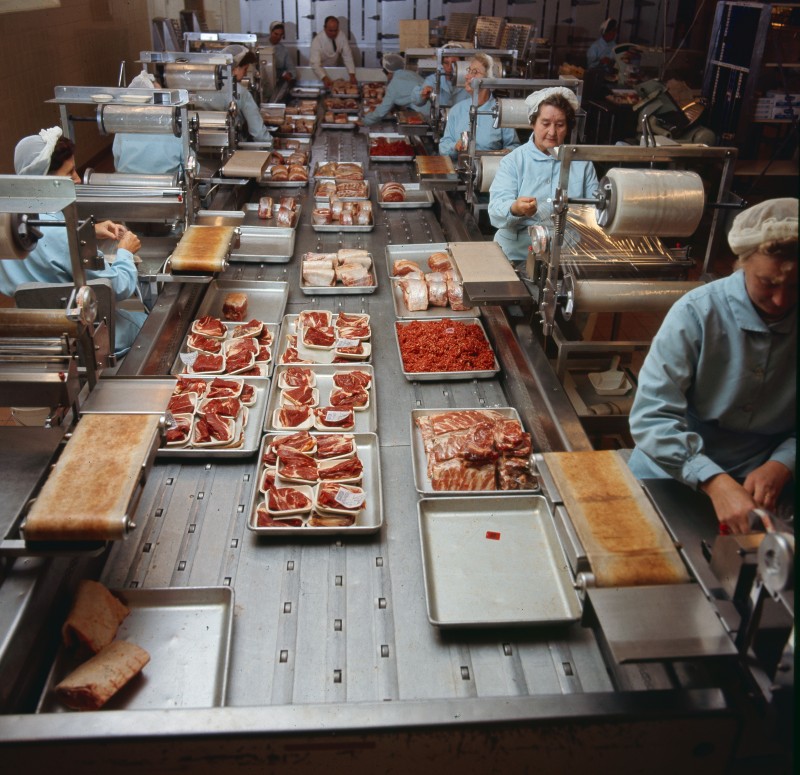 Between 1972 and 1973 sales of frozen foods and freezers had increased by over 30% and inspired by the success the new style of freezer-food outlets, led by Bejam in front of Alpine Everest, Cordon Bleu and Dalgetty, Sainsbury’s diversified into the frozen food market by opening a chain of freezer centres.

This new venture provided an opportunity for Sainsbury’s to make use of the prime high street locations formerly occupied by counter service stores, but too small for conversion to supermarket trading.

The first freezer centre was opened at Southbourne near Bournemouth in 1974, but was not an immediate success as few of local (mainly retired) population owned a freezer.  However, 9 other freezer centres were opened by the end of the year and proved much more successful. 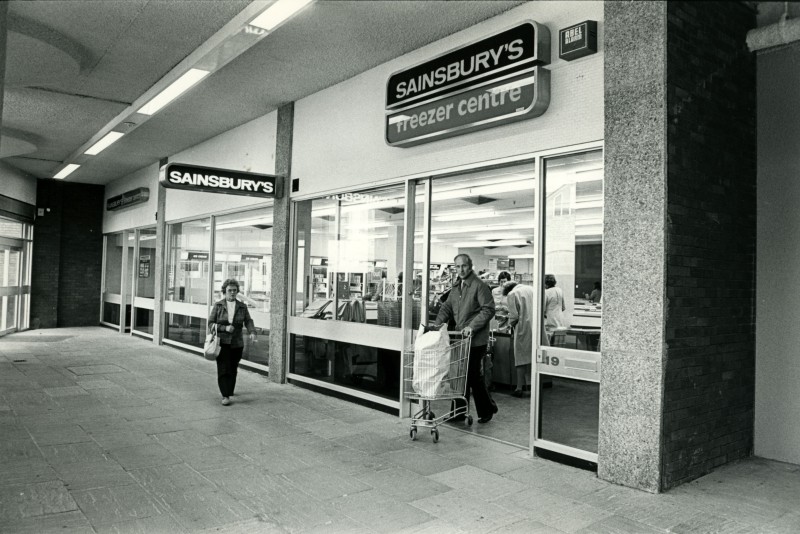 The new freezer centres sold over 3000 different products, the majority of which were large pack sizes which offered considerable price savings. Promotional material for the stores often featured the slogan: ‘Quality in Quantity at Sainsbury’s new Freezer Centres’ . 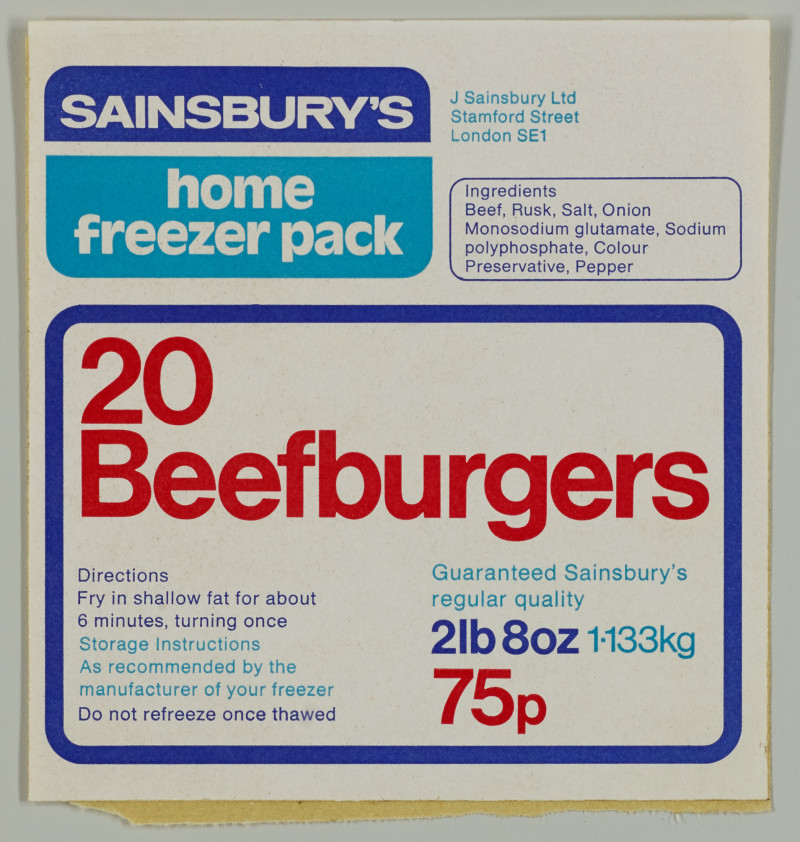 The range included  5lb ‘Home Freezer Packs’  of vegetables such as peas, beans and crinkle cut chips. There were also bulk packs of meat, fish portions and a huge range of frozen desserts, like Danish pastries, jam doughnuts, ‘banana dream pie’ and the ever popular Arctic Roll. There were even bulk packs of uncooked ‘Dinnodog’ meat for the family pet.

Although the emphasis was on bulk buying of basic foods to fill large ‘chest’ style home freezers, for the more adventurous, early price lists included ‘continental specialities’  such as lasagne, pizzas and ‘chicken espagnole’.

A 1975 price list includes the following ‘speciality dishes’, which were only stocked at larger freezer centres: 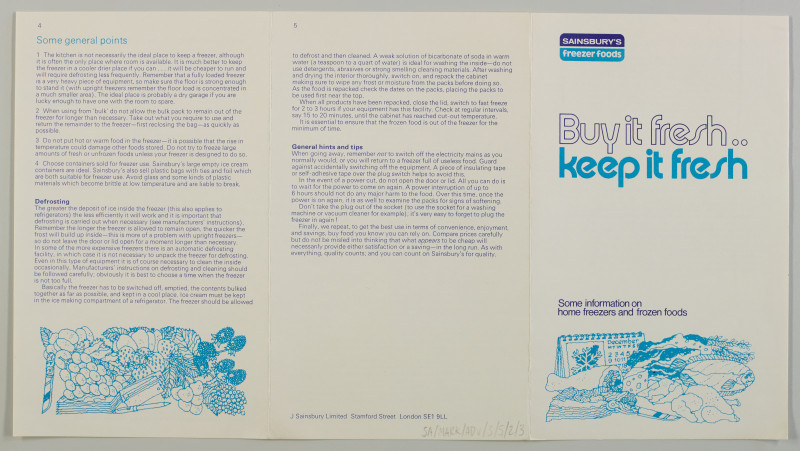 As frozen foods were such a new concept for the British shopper, Sainsbury's wrote several guides to help people understand the capabilities of the new technology.

By the late 1970s, the growth in popularity of fridge-freezers increased the demand for frozen ready meals and a wide variety of goods in smaller pack sizes including convenience ingredients like frozen pastry.  Sainsbury’s first chilled ready meals were introduced in 1983 - the original dishes were three ‘dinner party’ dishes fashionable at the time, Boeuf Bourgignon, Chicken Chasseur and Coq au Vin.  These proved to be ahead of their time, as the market later proved to be for supper dishes, rather than entertaining.  A 1983 advertisement for a range of frozen fish meals, including Cod & Prawn Pie with Grapes and Curried Seafood Pasta shows the same emphasis on fine dining, with the dishes pictured with a glass of wine and the slogan ‘Sainsbury’s invite you to stay in and eat out’. 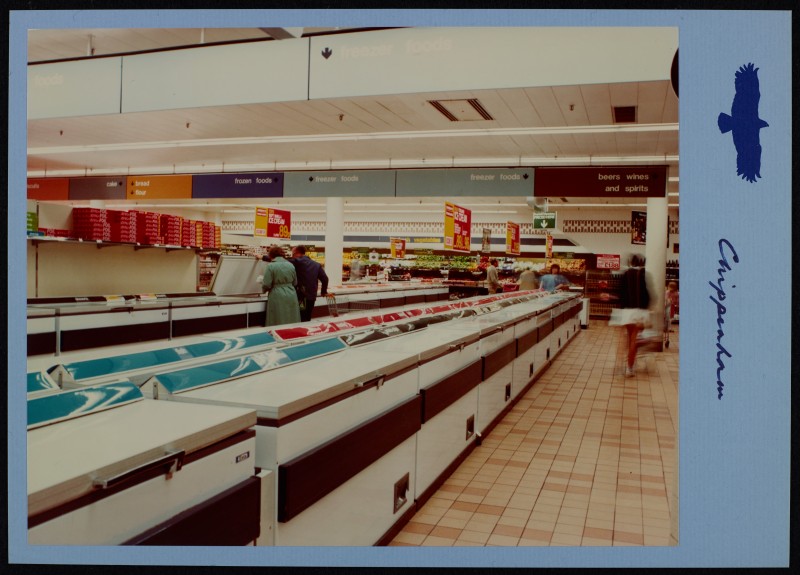 In 1974 only 11% of households owned a freezer. By 1982 this proportion had risen to 49 per cent.  Early on, Sainsbury’s took the decision to integrate frozen foods into new supermarkets rather than sell them in separate shops – the first ‘integrated’ freezer centre was incorporated into the new Chippenham branch which opened in 1975.  However Sainsbury’s continued run an ‘independent’ chain of freezer centres alongside the main stores (there were 21 trading in 1980) until they were finally sold to Bejam in 1986.

By this time freezers has become commonplace in the British home, and frozen food had been taken to heart by a population who wanted readily available food at their convenience.