The store was built on the site of the old White Hart Inn, a Jacobean post house, which took its name from Richard ll’s coat of arms. By 1903, when Sainsbury’s bought it, the Inn was derelict, and its licence withdrawn. It was commemorated by an engraved marble mural and tile designs at the store entrance. 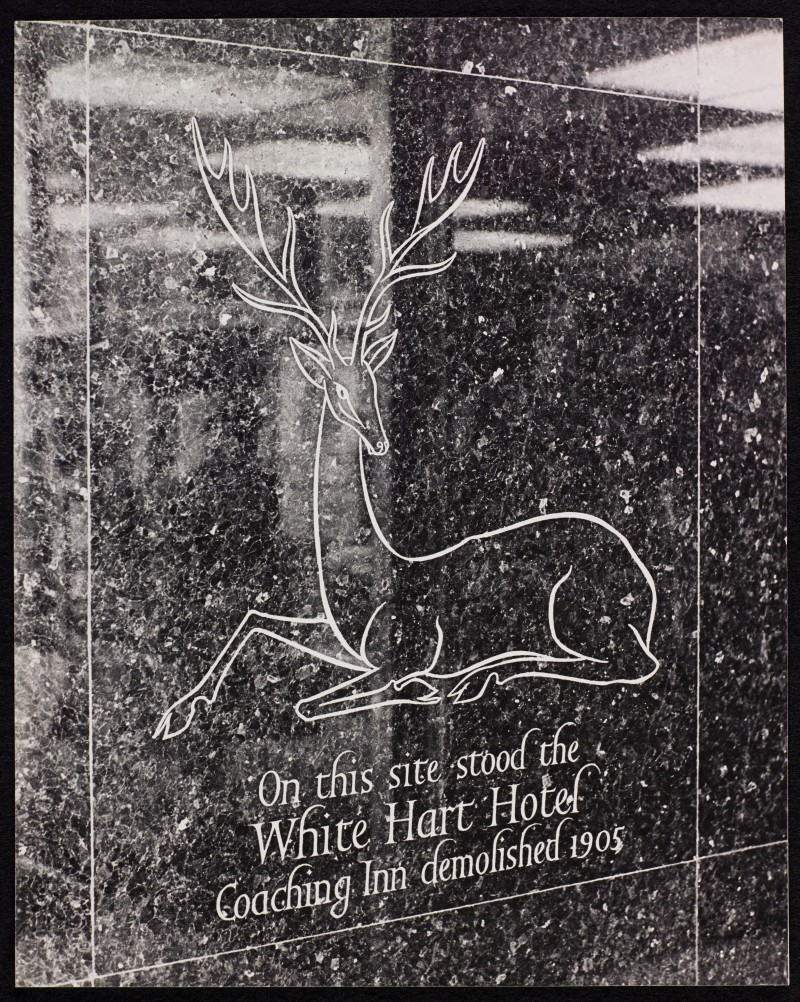 Opened on 16th November 1906, it was a little counter service shop decorated in the fashionable tile designs of the period. On the walls the central motif was of stylised crown imperials in cream relief, surrounded by a border of chrysanthemums against a blue background. Above this, just below the ceiling, was a row of celadon green tiles depicting stylised dolphins and fleurs de lys. Finally, the front of the counters was covered with ‘Sainsbury’s teapot brown’ tiles, specially made, like all the other tiles used by Sainsbury’s by Minton Hollins of Stoke on Trent.

The counter tops were made of white Sicilian marble, while the floor of the shop was covered with ceramic mosaic in subtle shades of green, blue, brown, and grey. The latter was also made by Minton’s and laid by Italian craftsmen. At the far end of the shop was an elaborate mahogany office screen, behind which the manager and cashier had their offices and at which customers could pay for their shopping.

‘The stock is of the most comprehensive description, embracing the choicest butters of absolute purity obtained direct from the farms of Brittany, Dorset and Aylesbury; new laid eggs, Wiltshire and Irish bacon; York and Irish hams; the finest English, American and Continental cheeses; ox-tongue in tins; fresh and salt dairy-fed pork; and all descriptions of poultry and game when in season…’ 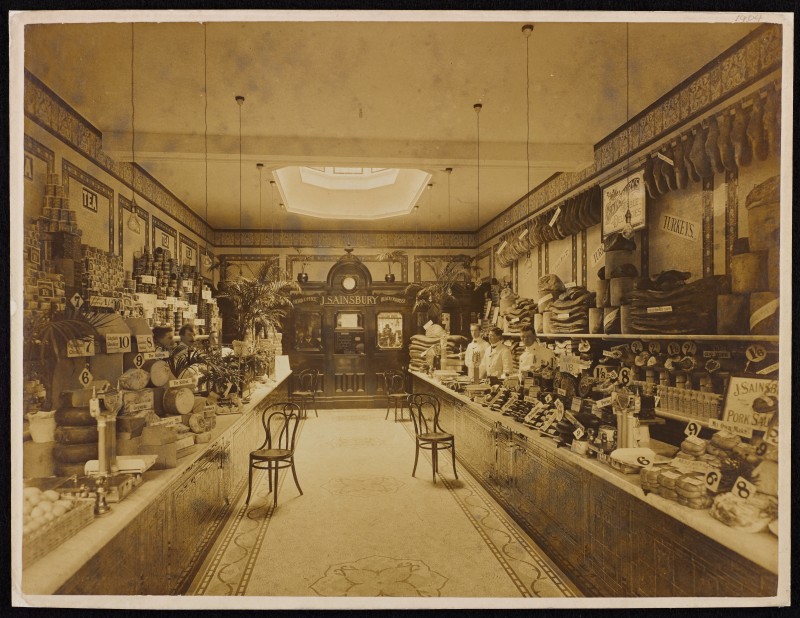 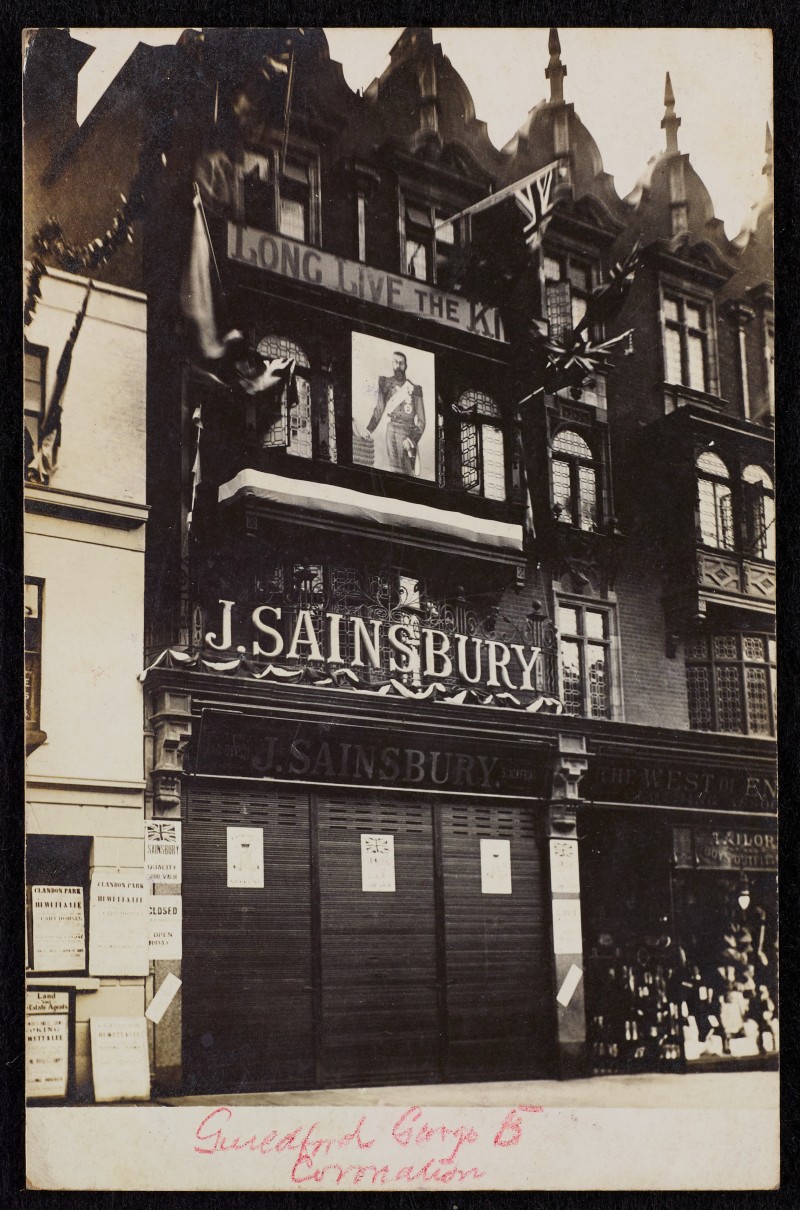 The Guildford shop was one of the first ‘country’ branches opened by Sainsbury’s in provincial towns to extend its trading area outside its traditional London trading area. To begin with, the Guildford branch struggled to attract enough trade to make it viable. John Benjamin Sainsbury, the eldest son of the company’s founders later recalled how he personally spent several weekends working at the store to lift its weekly takings above £40 per week. 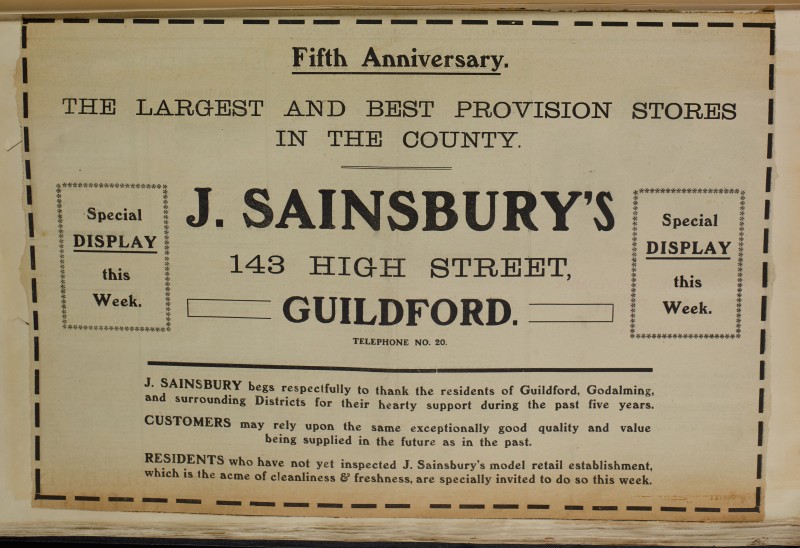 It didn’t take long to achieve this goal, and by 1925 the trade was sufficient to warrant an extension to the shop. Ten years later it was again extended, into the next-door premises, making it the largest of Sainsbury’s 157 stores. The enlarged shop offered a wider range of products, including a much greater choice of groceries and fresh meats. A contemporary advertisement proudly announced that it offered ‘the finest exhibition of food ever seen in the country.’ 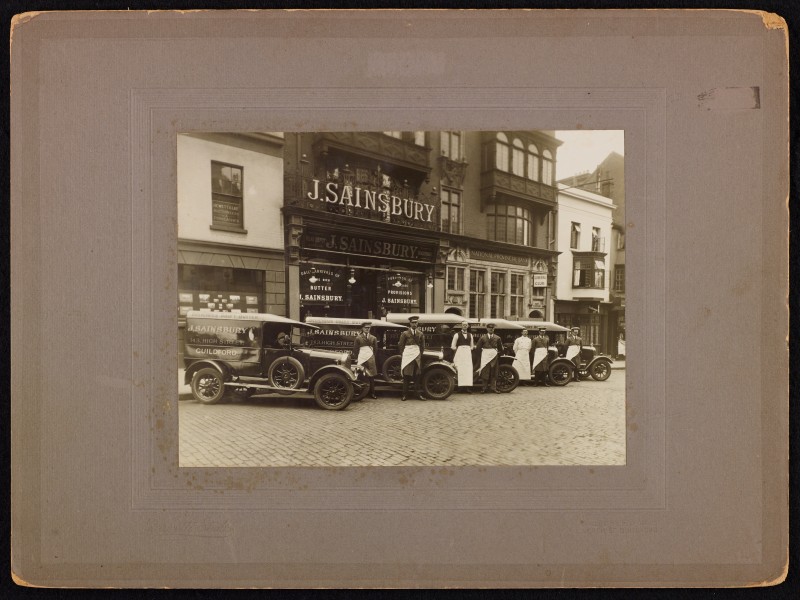 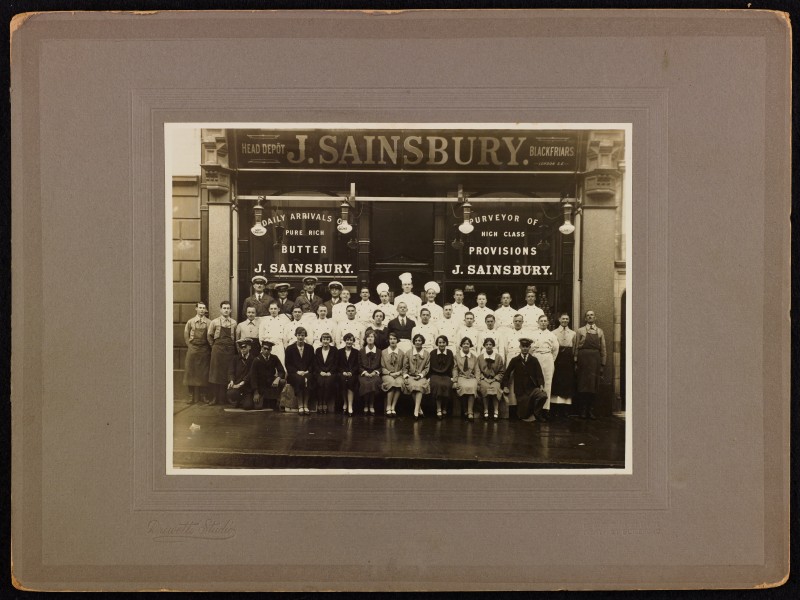 In 1962-63, the Guildford shop was again extended as part of a two-stage conversion to self-service. This involved completely replacing the branch with a modern supermarket while it continued to trade, extending it to sales area of just over 10,000 sq ft. and providing access to the adjacent multi-storey cark park, which was completed soon after Sainsbury’s conversion. The 1960s conversion also entailed the complete rebuilding of the shopfront with a contemporary style of fascia. 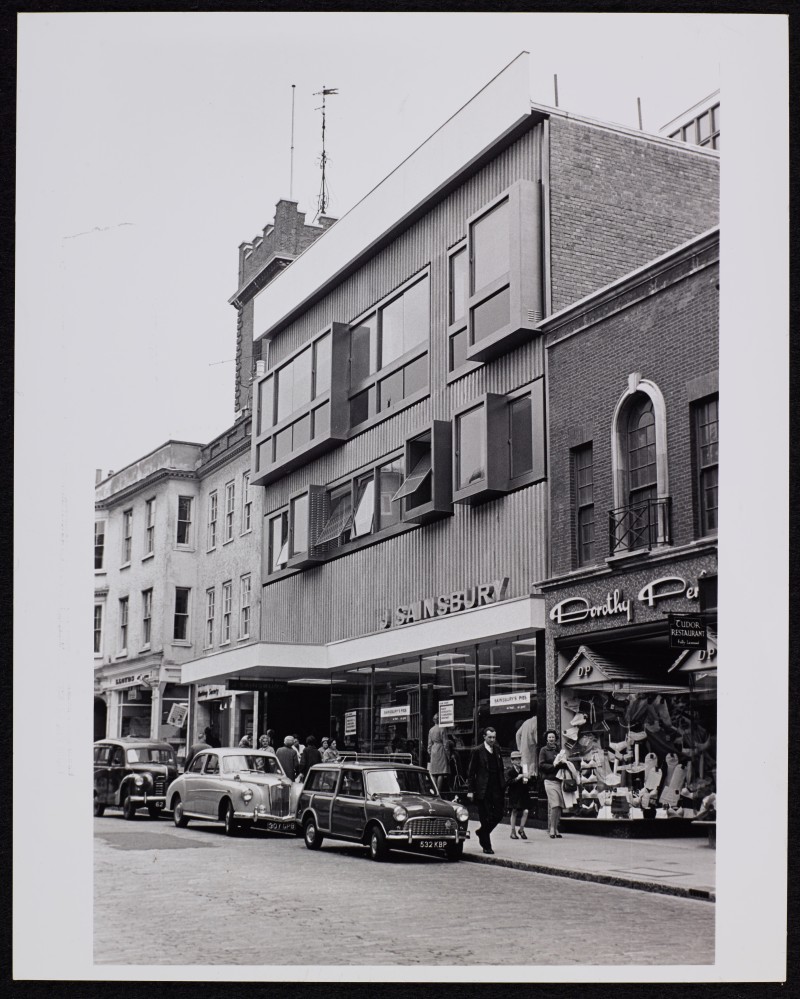 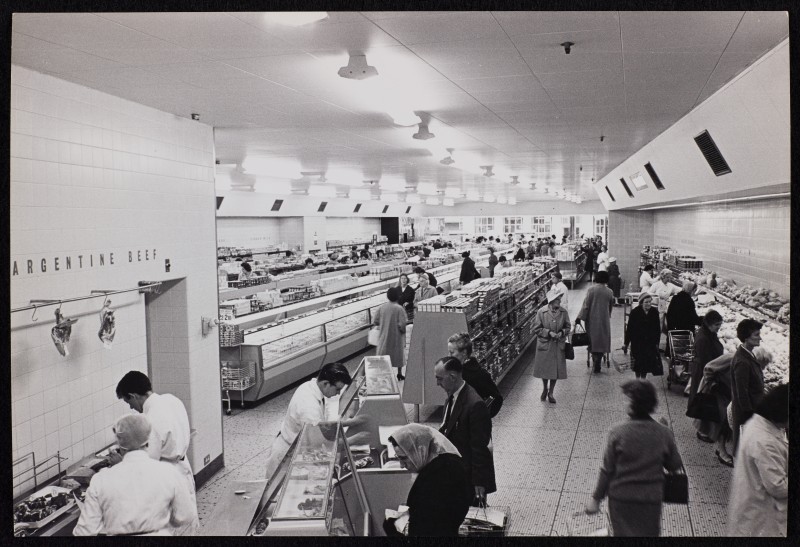 This, with a few adjustments, was how the store remained for almost thirty years until 1990, when once again it was subjected to a major refit which included not only the refurbishment of the store interior, but also the rebuilding of the store frontage to blend in with its Georgian surroundings. 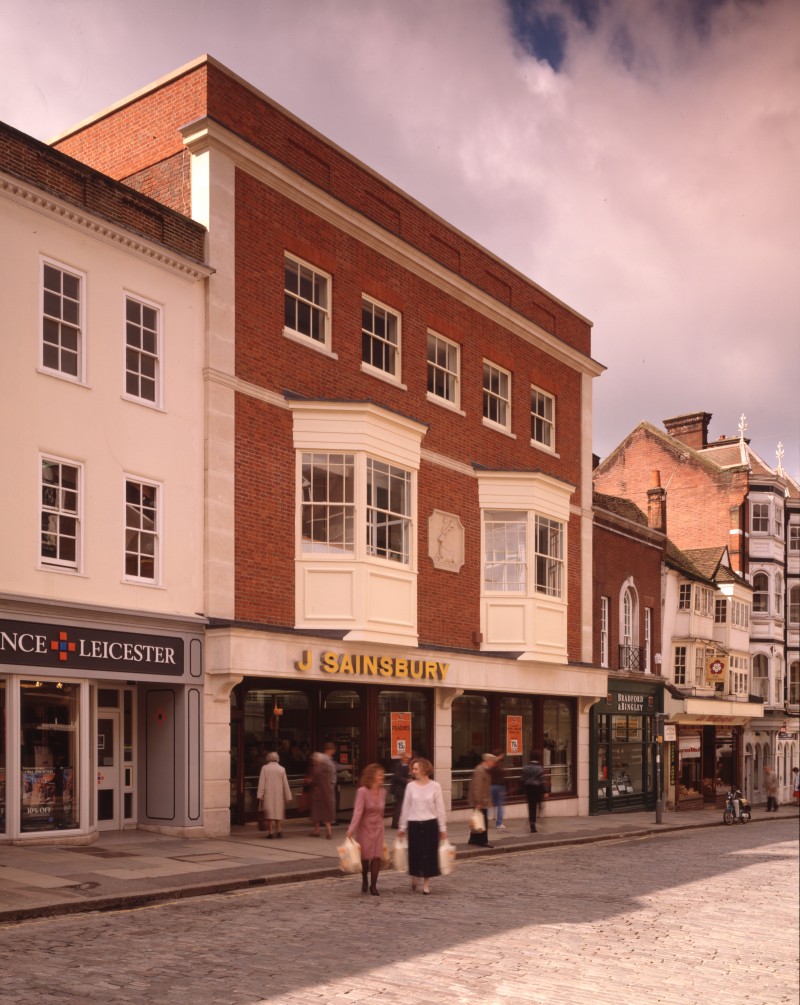 As a result, Sainsbury’s in Guildford High Street is still going strong, hundred and fifteen years after it first began serving the local community.