61/3 Rye Lane, Peckham was one of 41 branches Sainsbury’s opened between 1930 and 1935. Many were in areas of London not previously served by the company, which was growing rapidly under the leadership of chairman John Benjamin Sainsbury. 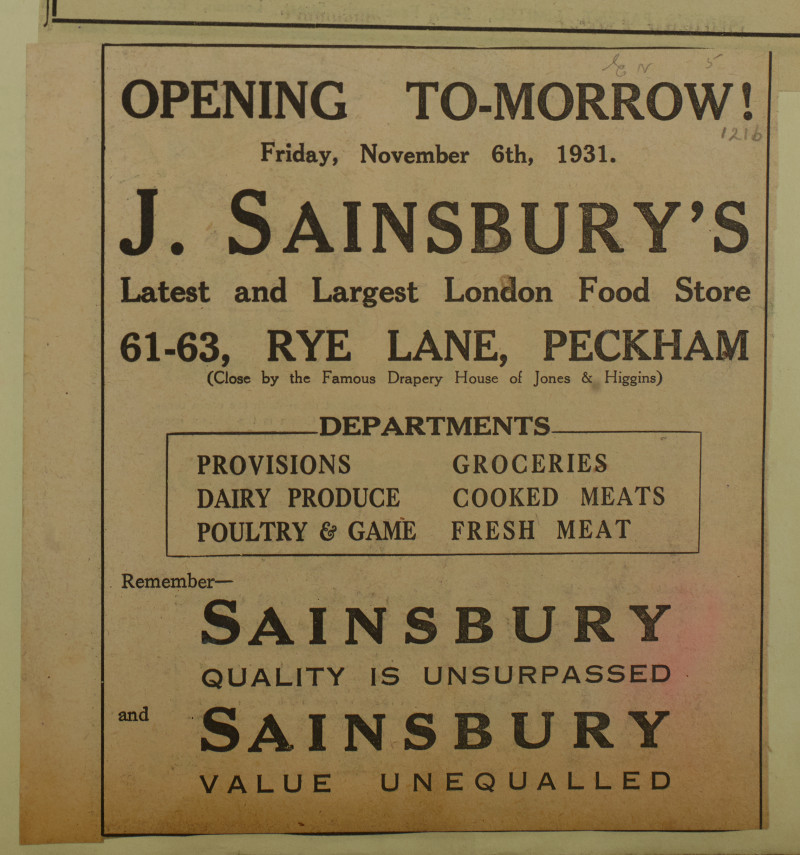 A photograph taken in the Rye Lane shop on its opening day shows staff dressed smartly in their uniforms. The decorative mosaic floor and tiled walls and counters were typical of the time. The tiles were specially made for Sainsbury’s and the counter tops were solid marble. The long, narrow interior was an example of the ‘tunnel’ branch shape. At the far end there was an office behind a huge teak frontage kept shiny by Sainsbury’s own team of French polishers. Staff accommodation was in a building behind the back of the shop. 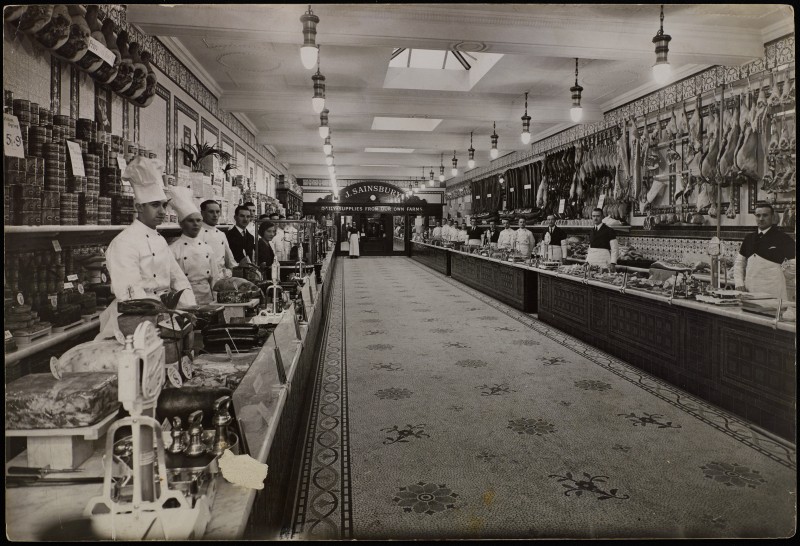 Advertising for the new branch emphasised Sainsbury’s reputation for quality and value. 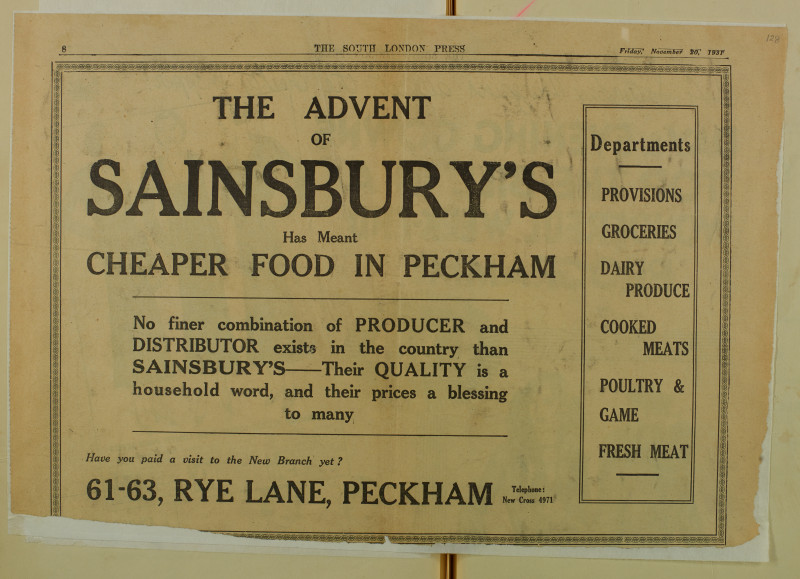 Expectations of staff at the new branch were high. One former employee recalled the ‘endless’ cleaning duties and ‘the need to wear clean, white semi-stiff, starched collars and apron (laundered at own expense)’. Shoes always had to be polished and weekly haircuts were required. Thanks to these exacting standards Sainsbury’s quickly built up a good reputation in the local area. 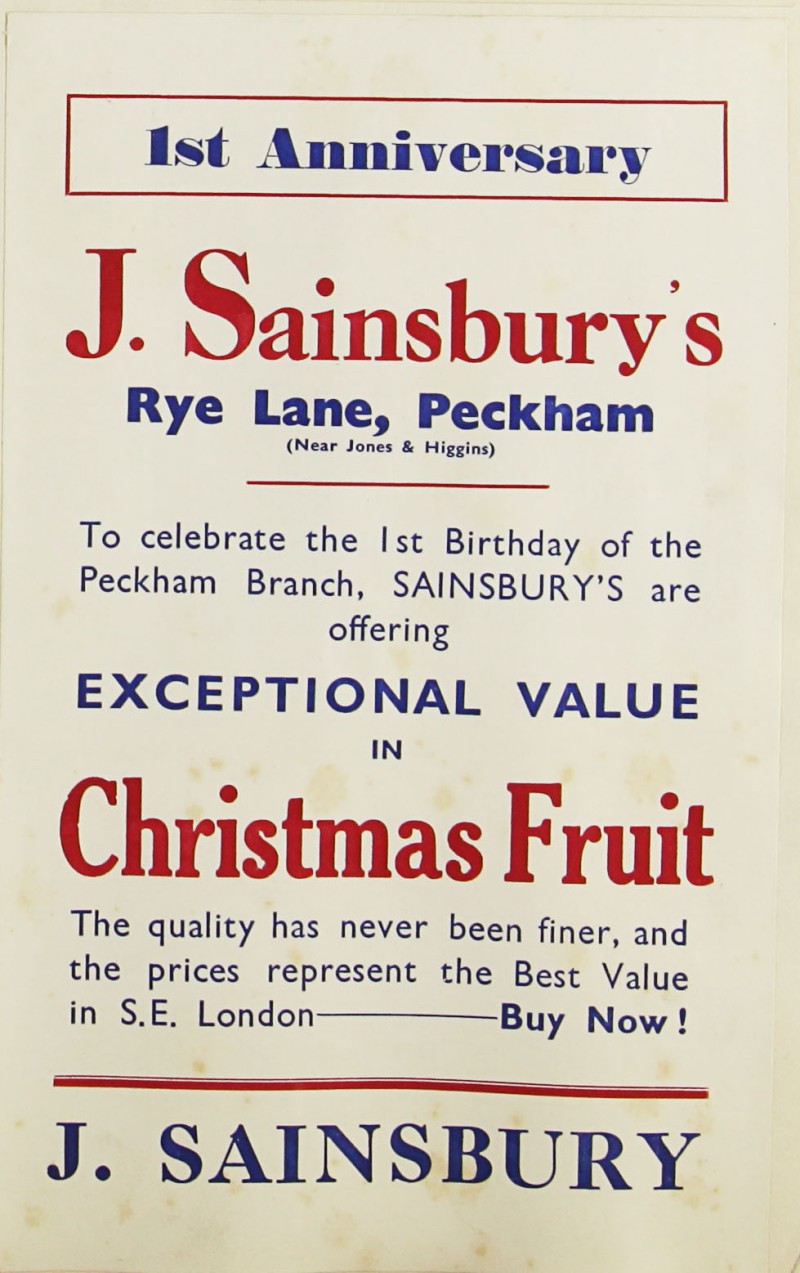 Two members of Rye Lane branch staff lost their lives during the Second World War. Their names are recorded on the Sainsbury’s Roll of Honour along with others from across the company. The branch building also suffered damage: records show that compensation claims were made in 1943 for repairs to its fascia, windows, marble counters and lights.

In 1950 Sainsbury’s opened its first self-service shop, at 9/11 London Road, Croydon. Instead of queuing for service at each counter, customers there could now take products off the shelves themselves and get their shopping done much more quickly. Self-service layouts also allowed for a much wider selection of foods. But this important milestone did not mean the immediate closure or conversion of all the shops designed for the old way of trading. Even in 1977, the Sainsbury’s staff magazine ‘JS Journal’ reported that Rye Lane was one of four branches around London keeping the ‘good old days’ of counter service going. 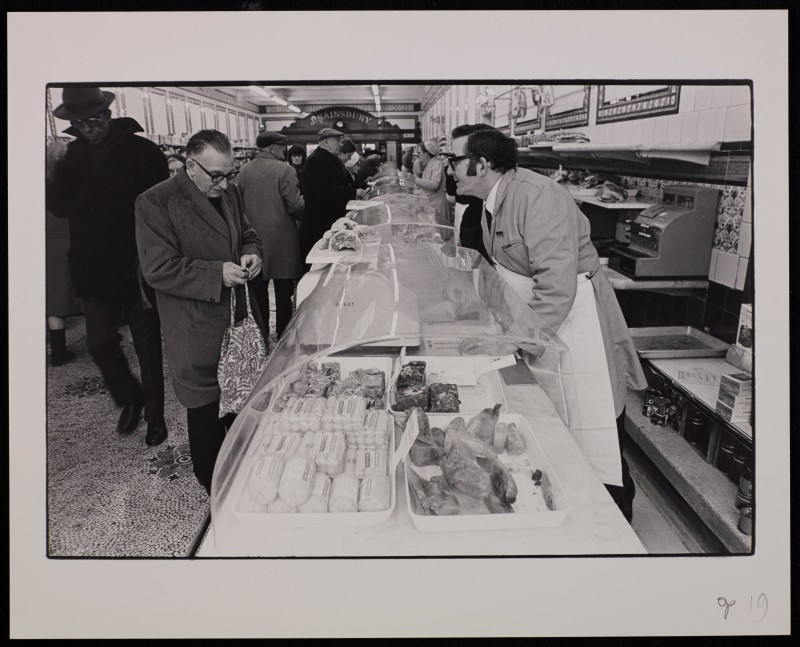 Continuing to trade the old-fashioned way presented a few challenges. Whereas most newer Sainsbury’s branches by this time were built with dedicated loading bays, at Peckham lorries had to be unloaded in bustling Rye Lane. 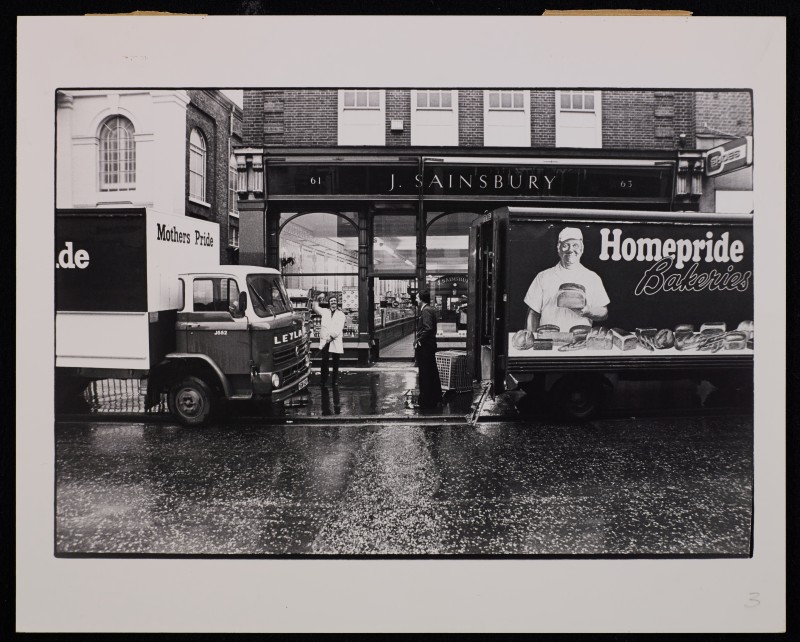 The small size of the shop meant that large deliveries could cause ‘chaos’. 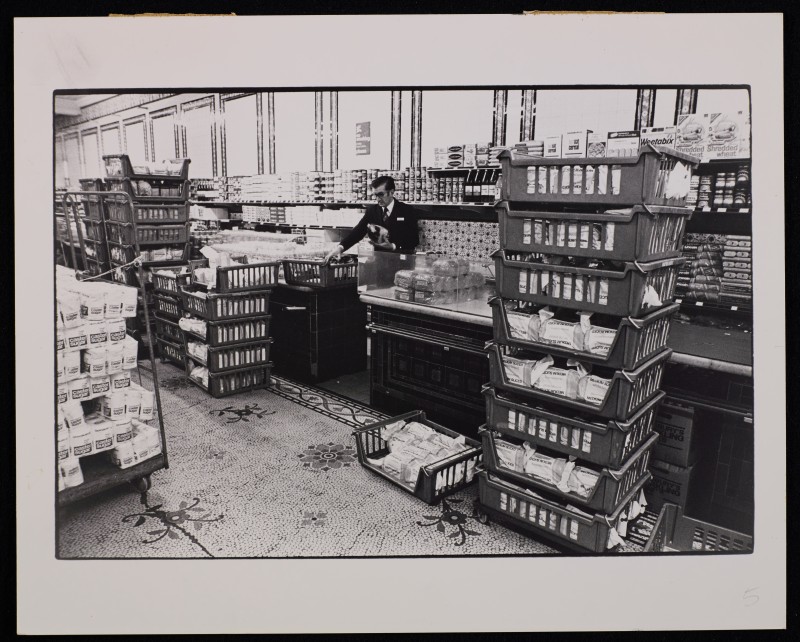 To access more storage space staff had to climb a flight of stairs. 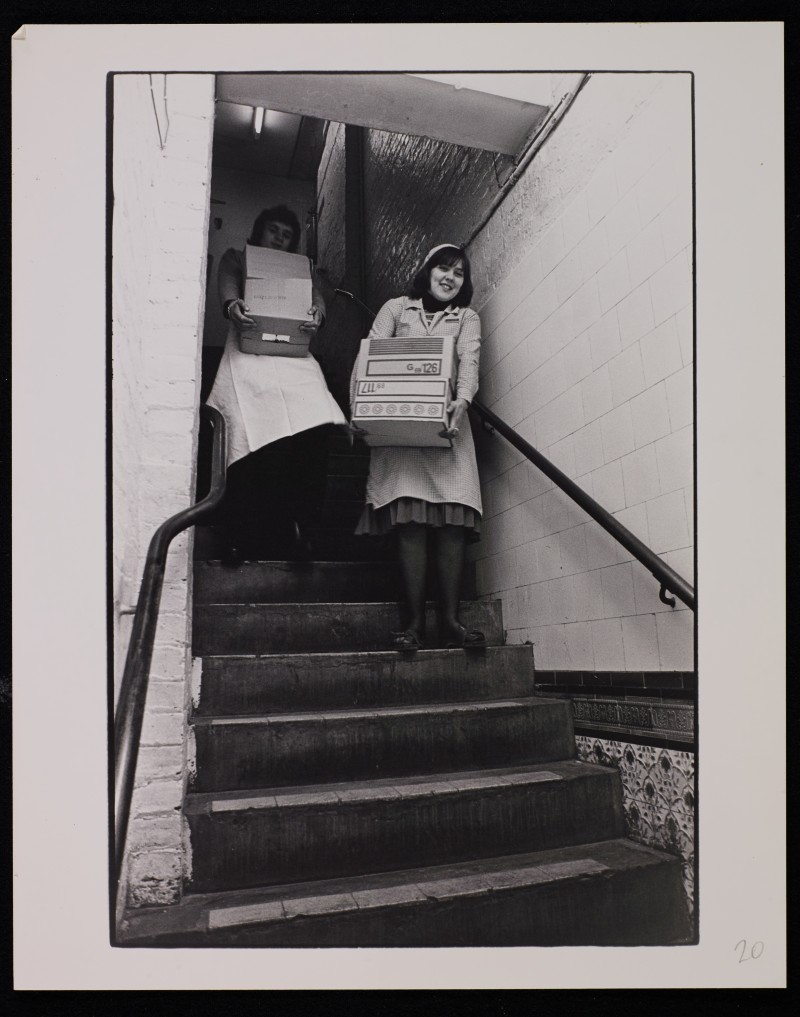 Despite the queues and lack of choice, many shoppers remained loyal to the branch. The staff knew exactly what regulars wanted and shopping was a social occasion. One customer said ‘if you like a store, you have patience’. 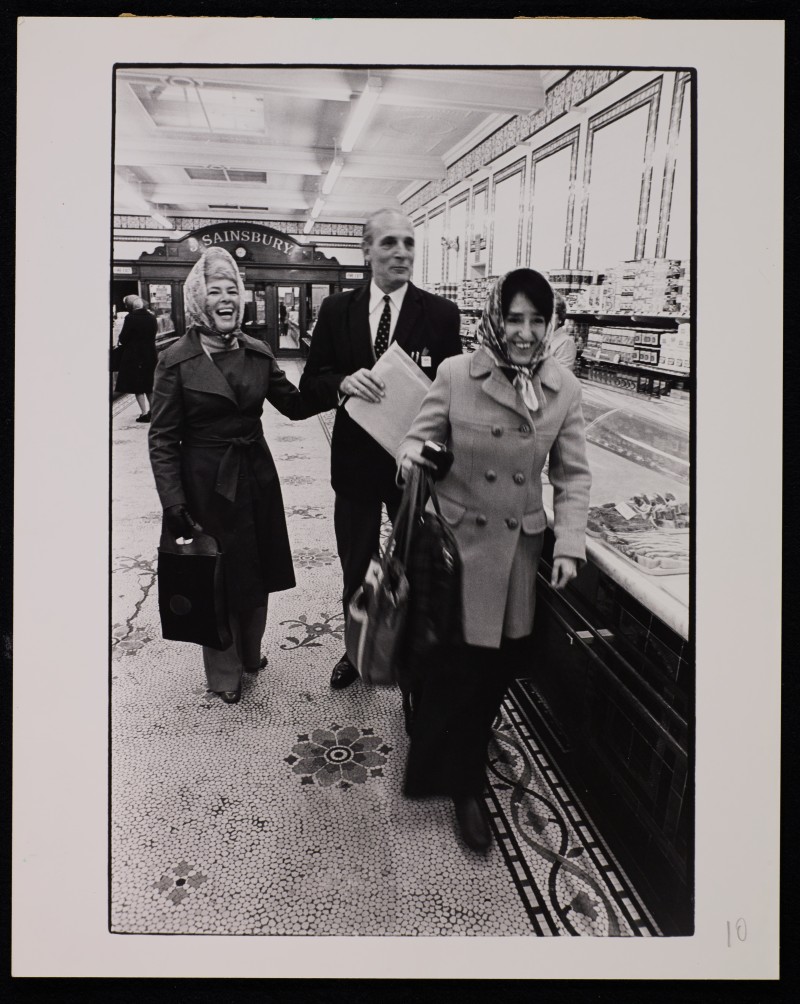 The distinctive tiles in the branch stood the test of time well, but in 1978 cracks in the mosaic floor meant it was covered with vinyl tiles for reasons of hygiene. The lighting had been modernised before this and some counters were replaced with freezers to meet changing customer demands. Aside from these changes Rye Lane celebrated its 50th anniversary in 1981 looking remarkably similar to the day it opened. By the end of that year it was the last branch of its kind in the company still trading. 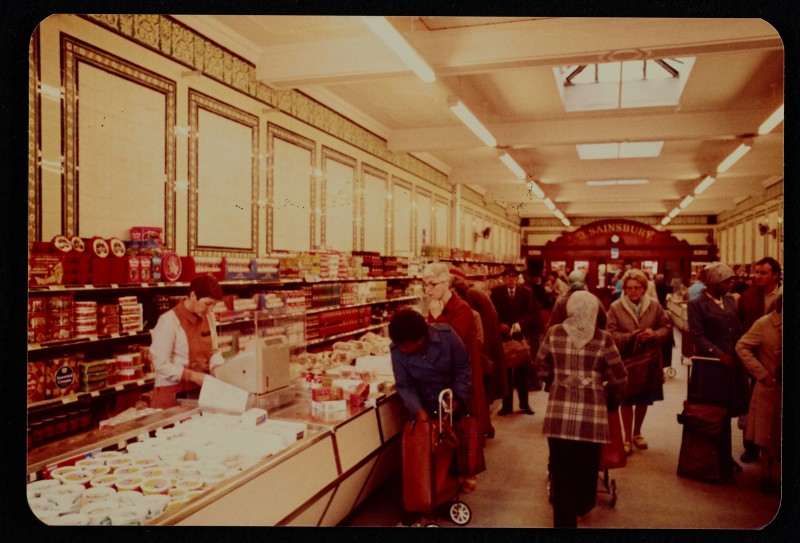 It did not survive much longer, however, and on 27 November 1982 it was closed, three days prior to the opening of a much larger Sainsbury’s nearby. The last day received national press coverage and many staff and customers alike were sad to see it go. Chairman John Davan Sainsbury noted how ‘it is always worth remembering that stores such as Rye Lane were responsible for establishing the goodwill and good name of the company upon which it trades so successfully today.’ 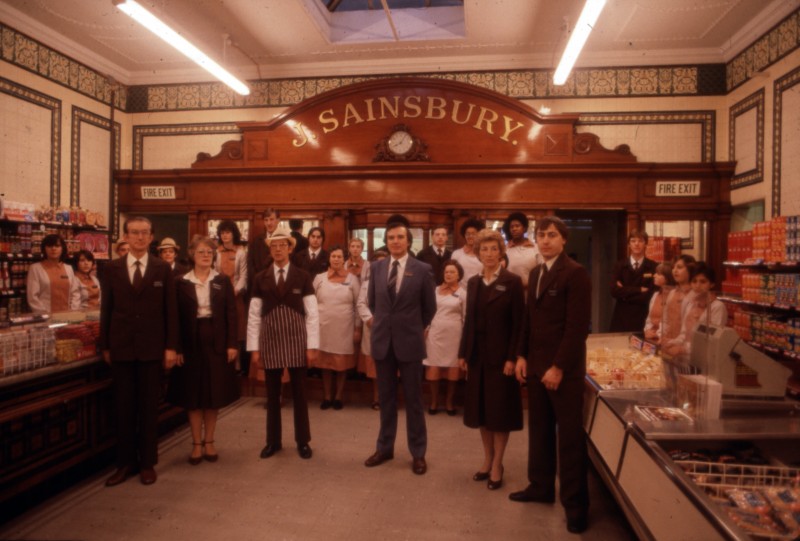 After the branch’s closure Sainsbury agreed to let the charity Help the Aged occupy the premises until it was sold or leased. It later became a shoe shop. 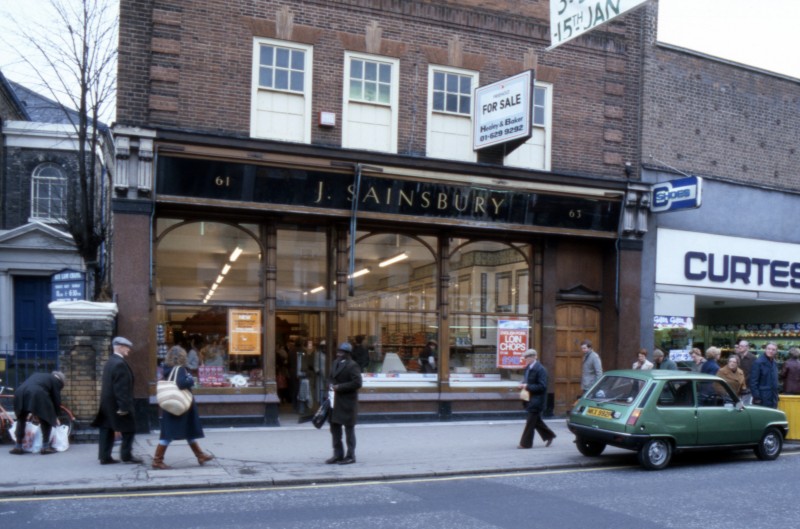 If you have memories of working or shopping at Rye Lane, or any of Sainsbury’s counter service branches, we’d love you to record them on our Memories page.